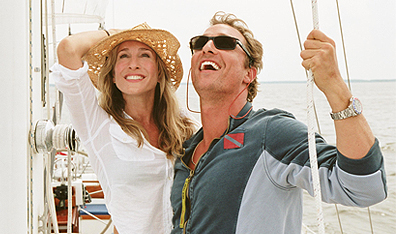 Summary: If your favourite movies already include the likes of Two Weeks Notice and Maid in Manhattan then trust us - you’re going to love Failure to Launch.

It’s pretty clear what you’re getting into here. The snappy title. The light pastel-coloured cover art. The presence of Sarah Jessica Parker. Yes, Failure to Launch is unapologetic in its rom-com credentials.

Tom J Astle and Matt Ember have spun their script around the idea of offspring who are incapable of tearing themselves away from their parents’ pad – a phenomenon that has apparently become known as ‘failure to launch’. This trend manifests itself in the shape of Tripp (McConaughey), a 35-year-old extreme sports fanatic who can summon up little motivation to depart his childhood bedroom, much to the chagrin of his long-suffering parents (Kathy Bates and Terry Bradshaw).

When Tripp’s folks hear that a couple of their friends have weaned their offspring away with the aid of a professional ‘interventionist’, they swiftly employ the bubbly charms of Paula (Parker) to help Tripp fly the nest. The (rather idiotic) idea is that through Tripp falling head over heels for Paula he’ll realise just how detrimental living with his parents is to any kind of meaningful relationship. And when Tripp does run into Paula in a sofa store – apparently by chance – everything does seem to go according to plan. The problems arise when Paula finds herself genuinely falling for her charge, and she begins to struggle to maintain her prolonged deception.

You get the idea – label this one ‘no surprises’. But Failure to Launch isn’t so bad as far as it goes. There are a few mildly amusing scenes, mostly thanks to Zooey Deschanel’s wonderful deadpan performance as Paula’s morose flatmate with a mockingbird problem. There are also a fair number of cringe-inducing moments, most gratingly one scene in which Tripp and Paula’s friends and family gather round a table to discuss ‘amusing’ ways of getting the couple back together – one of those sequences where you wish that even an empty rom-com like this would go easy with the corn.

As for McConaughey and Parker…Well, they haven’t got a great deal of romantic spark (though Paula is lying to Tripp for half the movie), but individually they’re both charming and amusing enough in the brand of childish adult roles that they usually inhabit. Both are talented actors who you’d like to see tackle slightly more challenging roles just for once, but McConaughey seems to have a compulsive attraction to slick, empty Hollywood fodder while Parker has so far failed to break free of roles that are little more than lightweight variations of Sex in the City’s Carrie.

But it’s pointless to bandy around words like ‘predictable’ or ‘fluff’ here – it’s like taking a holiday in the Artic Circle and complaining about the snow. Failure to Launch is as slick and inoffensive as a thousand other conveyer-belt Hollywood rom-coms. If your favourite movies already include the likes of Two Weeks Notice and Maid in Manhattan then trust us – you’re going to love Failure to Launch.

Skip past the Making of documentary, and there’s a couple of mildly interesting features here that attempt to give Failure to Launch some kind of dubious psychological weight.

One documentary examines the genuine sensation of ‘failure to launch’ with no shortage of odd-looking specimens keen to explain away their inability to leave the nest. Another doc deals with internet dating – never mind the fact that the film has nothing to do with internet dating whatsoever. Plus there’s some vaguely cruel competition where two of the movie’s supporting players attempt to unearth the most tragic real-life case of failure to launch.