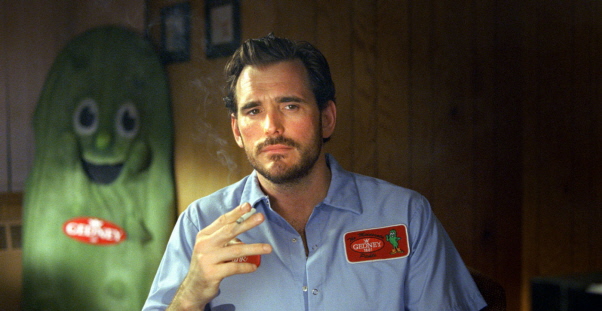 Summary: You do emerge from the cinema determined to quit your job, become a penniless bum and focus your energies on meaningful pursuits – something many other movies can only aspire to achieve.

Based on Charles Bukowski’s second novel and incorporating elements of his short stories, Factotum is essentially a movie about following your dream – but with the disclaimer that sometimes you’ve got to starve to achieve it.

The film (helpfully subtitled “Man of Many Jobs” for those without a dictionary to hand) focuses on Bukowski’s alter ego Henry Chinaski (Dillon) as he bounces from one dead-end job to another in order to pay for a life of drinking, gambling and writing short stories. Along the way he falls in with fellow lost soul Jan (Taylor), and they embark on a tempestuous relationship fuelled by sex and alcohol.

Factotum makes a pretty decent stab at recreating Bukowski’s combination of paint-stripping toughness and bleak humour, angrily reacting against a bureaucratic world that forces people to spend their time in meaningless ways. Chinaski knows what he’d rather be doing – drinking and writing – and while that sometimes means he ends up homeless and broke the important thing is that he never compromises on his ideals. Despite the squalor and the variety of broken characters Chinaski runs into, Factotum is ultimately a film about hope – after all Bukowski did become vastly successful in the end.

One message of Factotum may be “Never let the bastards grind you down”, but this is no downbeat kitchen-sink drama. Propelled by Kristin Asbjornsen’s jaunty score, the film finds humour in the sheer ludicrousness of the everyday world – a job cleaning the nose of a giant stone statue being one highlight – but also in Chinaski’s complete disinterest in that world, as when he and Jan return to bed while a fire rages in their apartment block.

Chinaski himself is well recreated by the excellent Dillon (on something of a roll after a career-best in Crash), who manages to combine the necessary burly physicality and bad-tempered drawl with a constant perplexed frown as if he doesn’t understand why the hell things are quite as crazy as they are. Chinaski isn’t a character that gives a damn if we like him and often we don’t (in one scene he storms into a bar and punches Jan while stunned onlookers stare on). But his attempts to maintain a personal integrity in a land of vast inequality are never less than compelling.

Bukowski’s novels explore concepts of masculinity and the problems those concepts create, and he’s faced a number of accusations of misogyny for the depiction of his female characters. But the women here are all from a similar kind of poor, itinerant background as Chinaski; they too exist on the peripheries of society. Taylor is fantastic as Jan, a character that needs emotional attachment to lift her out of the despair of everyday life – an emotional attachment Chinaski is unable to return. Tomei meanwhile reminds what a great actress she really is in her portrayal of Laura, a fellow barfly with an ambiguous background who briefly becomes involved with Chinaski.

Factotum works hard to establish its indie credentials with a suitably grainy style and a deliberate pacing that mimics the hard, stripped-back prose of the novel. Director Hamer (who co-wrote along with Producer Jim Stark) scales back on the city-hopping of the book, and manages to make an inevitably episodic movie both coherent and enjoyable. It may not match the venom of Bukowski’s words, but you do emerge from the cinema determined to quit your job, become a penniless bum and focus your energies on meaningful pursuits – something many other movies can only aspire to achieve.