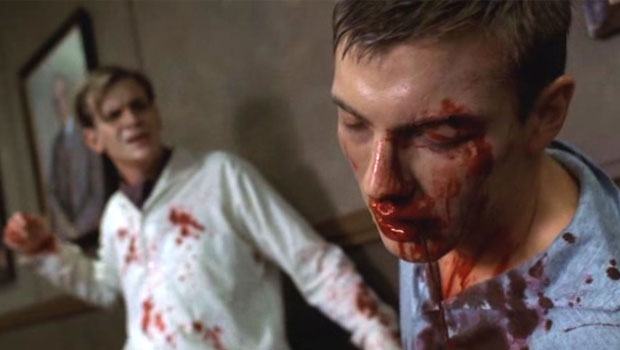 Summary: Erik’s revenge is a long time coming, but it’s worth the wait.

16-year-old Erik Ponti (Wilson) is doing what he does best: beating the crap out of one of his fellow students at school. This time he has gone too far, and he is expelled despite his academic potential and good grades. His mother (Marie Richardson), in a last ditch attempt to get Erik to graduate, sells some family heirlooms and arranges for him to attend Stjarnsberg Boarding School, a prestigious boy’s academy. Stjarnsberg is a fine school with excellent staff and facilities, set in pretty woodland, its students the scions of wealthy and noble families. Erik arrives confident that he can start afresh, away from his abusive stepfather – that this is a place where he won’t need to get into fights to prove himself or earn the respect of his peers.

Erik is soon disabused of this notion. Stjarnsberg is run by the pupils for the pupils, using something called fraternal discipline. Erik sees this in action on his first evening – during dinner, a boy is caught swearing, and Silverhielm (Skarsgard), a senior pupil and head of the table, administers a ‘dubbing’ – a sharp blow to the top of the head with a heavy silver knife. None of the teachers, who sit at a separate table, bat an eye. The boy returns to his place with tears in his eyes as the rest of the younger classmen look at their plates, simply relieved that it didn’t happen to them.

Erik’s roommate, Pierre (Lundstrom) explains the rules as the boys go for a quick cigarette. If you refuse a dubbing, the next thing is the dunce’s corner. A worse, but similar punishment is the one-stitch blow – using the pointed end of a glass carafe stopper. If you refuse that, your weekend leave is cancelled. There is no alternative and no appeal – expulsion follows, and the teachers will do nothing. Erik is naturally outraged, but he’s hamstrung – if he gives in to his instincts and fights back, he will be expelled, and he can’t go back to Stockholm and his stepfather. Pierre advises him to do as he does – keep a low profile, obey the rules, don’t fight the system. But when Erik joins the swimming team, having beaten the school record, and becomes something of a hero to the lower school, he attracts the attention of the Senior Boys, determined to bring him into line.

It’s been a while since I watched a film that left me with a knot in my stomach, feeling sick and exhilarated by turns. Director Hafstrom is masterly at turning up the tension notch by notch. He also cleverly turns our expectations on our heads: at the beginning of the film Erik seems to be the personification of evil, but the systematic abuse that he suffers from turns him into first victim and then hero. We see Erik take a slap across the face from his stepfather for no reason; this is followed by a ‘talk after dinner’, a regular event where Erik is systematically beaten with a riding crop. By the end of the film we are rooting for Erik and thrilled when he takes on the school, the prefects, and his wicked stepfather.

The film is cleverly, almost slyly, political. Erik’s roommate Pierre advises him to model his behaviour on Gandhi – if he can’t keep a low profile, he can try non-violent resistance. The school system is a microcosmic image of a tyrannical society – the rich older boys rule the roost while the juniors bide their time, accepting the bullying, waiting to become bullies in their turn. The older boys cannot allow one junior to step out of line, or their reign will be over, so they are almost compelled to crush Erik, but they underestimate his resilience and will. He in his turn triumphs over the system with a mixture of brain and brawn, using a combination of the legal knowledge that Pierre has given him and his own physical strength and skill at fighting dirty.

It’s not a perfect film, but it’s extremely powerful and absolutely captures the weird culture of a single sex boarding school. It features a knockout central performance from Andreas Wilson in his first feature role; channelling James Dean with his blond quiff and leather jacket/jeans combo, he’s a rebel with a cause and should go far. The teen romance is slightly unbelievable; what’s more difficult to accept is that the teachers would be allowed to get away with such a dereliction of care, even in the 1950s. The violence isn’t constant, but is uncomfortable to watch, partly because it feels so real and comes on top of a barrage of petty abuse. Erik’s revenge is a long time coming, but it’s worth the wait.