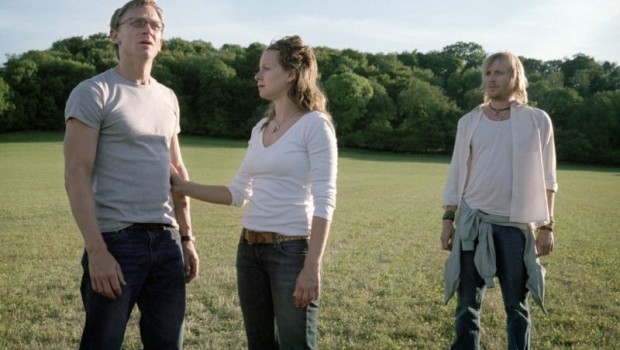 Summary: If you aren’t too irritated by some of the inevitable deviations from the novel and don’t find its protagonists too off-putting, it does make for undeniably compulsive viewing.

An adaptation of one of Ian McEwan’s most acclaimed novels, Enduring Love opens with a vivid realisation of the book’s most striking scene. University lecturer Joe (Daniel Craig) and his sculptor girlfriend Claire (Samantha Morton) sit enjoying a picnic in the rolling green fields of Oxfordshire. As they quietly sip champagne the surroundings couldn’t appear any more serene, any more romantic…until a hulking hot air balloon suddenly crashes to the ground before them. Trapped on board and carried along by the wind is a young boy, and the couple join the boy’s grandfather and two other men in the vicinity in desperately trying to rescue him. The scene culminates in a tragic death that throws Joe’s entire comfortable world into hopeless confusion.

After this attention-grabbing opener, Enduring Love slowly morphs into a kind of slow-burning stalker movie with the re-emergence of one the men from the rescue attempt in Joe’s life. Intense, emotional and deeply religious Jed (Ifans) initially appears something of a harmless oddity; but it isn’t long before he shows himself to be a far more disturbed individual. Jed has seen the accident as a higher sign of an intimate connection between himself and Joe, and as his attentions become ever more obsessive it begins to tear Joe and Claire’s own relationship apart.

Enduring Love may come from the director of Notting Hill, but don’t let the title fool you into thinking another cosy romance movie is on the agenda. In fact, the film is more reminiscent of traits in Roger Michell’s other films – the expert tension of the thrilling Changing Lanes combined with the low-key human drama of The Mother. The stalker theme is of course a well-worn one. Yet, while never entirely original, both McEwan’s novel and Michell’s film are keen to see the events as a meditation on the nature of unrequited love and emotional disconnection rather than an opportunity for Pacific Heights-style histrionics. For as much as we find the central protagonists making declarations of love in this movie, none of them can really understand the emotions – or actions – they witness in other people.

The main difficulty some audiences may have with Enduring Love is that it is populated almost entirely by cold, unlikeable characters (well, unless you count the wisecracking addition of the ubiquitous Bill Nighy who seems to have wandered in from another movie set). Craig is sullen, cynical and callous. Morton is self-obsessed, unemotional and unsympathetic. Ifans is manic, disturbed and unpredictable. And most scenes are played out to gloomy London locations often drenched in silence and foreboding. All of which is central to a film that explores the gulf between emotion and modern society, but the film does occasionally feel something of a middle class exercise in brooding rather than a genuine character study.

Not that there’s not some good playing here, with Ifans’ animated performance (a combination of lonely despair and an oddly comic flair) making a good counter to Craig and Morton’s dour turns. Meanwhile Michell makes effective use of combing the jagged hand-held camerawork that marked Changing Lanes with languid scenes that bleed eerie menace.

In fact Enduring Love as a whole is an oddly unsettling experience. But if you aren’t too irritated by some of the inevitable deviations from the novel and don’t find its protagonists too off-putting, it does make for undeniably compulsive viewing.

The commentary by Michell and producer Kevin Loader is an earnest but eloquent discussion of Enduring Love’s themes, and gives some pointed insights into the making of the movie (with facts like the opening sequence sucked up a third of the film’s budget). Then there’s the obligatory trailer and deleted scenes (nothing the movie couldn’t have done without, though it might please anyone who found themselves screaming “Why doesn’t he just go to the police?” throughout the movie) and a couple of reasonably interesting featurettes about the film’s acting and the adaptation from the novel. As well as the cast and crew voicing their opinions on what the movie meant to them, the latter featurette perhaps most intriguingly has Ian McEwan giving his views on the differences in the finished movie, though it might have been more fun to watch if he’d actually detested the whole thing! Wisely there’s a separate featurette that goes behind the scenes of the opening sequence, which is fascinating to watch and actually could have done with running on a little longer. Finally the movie includes an odd short film called Burst (revolving around the life of a fictional actor), which features several of Enduring Love’s actors and lots of red balloons. Burst is pretty awful it has to be said, the thing perhaps frivolously put together with a bit of extra cash left over from Enduring Love, but it’s a pity the potential for DVDs to come equipped with a short film or two is isn’t used a little more. All in all though, not a bad package.