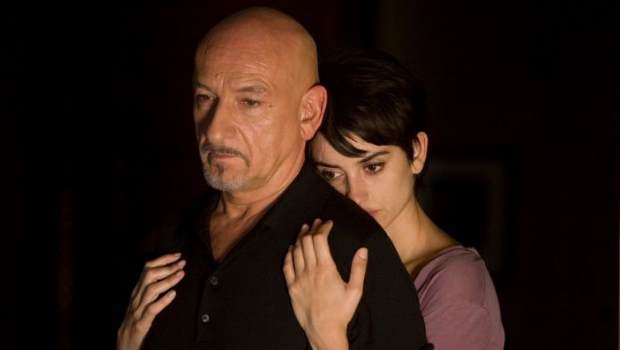 Summary: Elegy wants so much to be seen as poetic and beautiful, it’s title and lush cinematography are clear pointers to that, but it ends up being more pretentious than profound.

Elegy is Hollywood’s newest attempt at bringing Pulitzer Prize-winning novelist Philip Roth’s writing to the screen. Adapted from his novel The Dying Animal, the story centres on David Kepesh (Ben Kingsley), a respected author and lecturer entering the latter stages of his life, clinging firmly to his philosophy that sex, and the pursuit thereof, is everything. The film follows his attempts to bed a beautiful young student, Consuela (Penelope Cruz), and examines the emotional trauma as, much to David’s surprise, the two begin to fall in love.

Spanish director Isabel Coixet sets out her stall with a self-consciously intellectual opening scene; we see David on The Charlie Rose Show discussing his controversial new book. The two men sit on a simple black set, there’s no music, just their conversation on the soundtrack. It’s a good start, setting up Kingsley’s compelling performance as the aging pleasure-seeker and also establishing the film’s intention, to be a serious dramatic analysis of this character. But it also suggests a high-minded pretension that proves to be the prevailing tone as the film progresses; ultimately a sombre belief in its own importance is Elegy’s undoing.

It also doesn’t help that most of the significant observations that Elegy has to make about love, sex and relationships are concisely summed up in David’s voice-over segments, largely lifted verbatim from Roth’s novel. The result is that many of Kingsley and Cruz’s scenes together simply show us what we have already been told. More satisfying are the film’s secondary stories, with Patricia Clarkson and Dennis Hopper both excellent in small but significant roles, adding dimension as lover and friend respectively, bringing refreshingly sensible challenges to David’s selfish perspective.

The film that Elegy put me most in mind of was, oddly, Woody Allen’s Manhattan, which addresses these same themes of sex, death and jealousy through the portrayal of a relationship between a man and a much younger woman, with the man doing a lot of fretting about it with a close friend in various New York locations. The difference is that Manhattan does all this with heaps of humour, warmth and romance, and while Elegy clearly isn’t attempting to do these things, the point is that Allen’s approach is the better one when tackling such big themes on the cinema screen. Elegy wants so much to be seen as poetic and beautiful, it’s title and lush cinematography are clear pointers to that, but it ends up being more pretentious than profound.