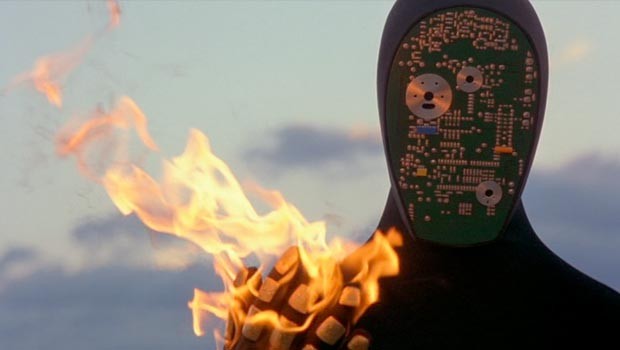 Summary: If you like your art films with little panache but plenty of artsyness, Electroma will be right up your street.

Not much happens in Electroma. If you thought Harmony Korine’s ‘Gummo’ was pretentious, think again. As far as films go, Electroma is as far removed from your average cineplex offering as they come. Written and directed by French electro duo Daft Punk, Electroma is as art as art films get, scrapping conventional dialogue or indeed plot development in favour of silence and, well, little else. For what it’s worth, this epic fantasy road film cum sci-fi tale of two robots on their quest to become human has Daft Punk written all over it, and that’s the highest recommendation one can give it.

If you’re unfamiliar with the music of Daft Punk, there is little that will draw you to see this upon its release on DVD. Throughout their entire 12-year career, the French duo has persisted in remaining mysteriously anonymous, constantly wearing an ever-changing selection of masks to cover their true identities and refusing to appear in their own music videos. Their music, tender electronic beats morphing into filthy anthemic basslines is as enigmatic as the band’s identity. The reality is – it works. Millions of records sold, Guy-Manuel de Homem-Christo and Thomas Bangalter, aka Daft Punk, have transversed the boundaries of independent and mainstream techno and brought what once used to be music for underground dives and arena raves to the masses.

The story in Electroma – that of two robots trying to become human but miserably failing – is deceptively simple, and toys with the ever present Daft Punk ambiguity of reality/fiction, emotion/indifference, human/robot. The main two characters, named Robot 1 and 2 and portrayed with motorcycle helmets instead of heads, are on a journey across the Californian desert that eventually takes them to Inyo City, where all inhabitants are similarly helmet-headed. On a visit to a high-tech laboratory liquid latex is poured onto their helmets to give them human-like faces that infuriate the locals. The robots represent none else but the two brains between Daft Punk and by the end, they’ve even managed to squeeze out some tenderness from the viewer. Unfortunately, what you’ve seen up to that point doesn’t really amount to much after all.

In essence, this is an extended music video, a dialogue-less 80-minute journey across desert landscapes and nondescript Californian locations set to a soundtrack of understated electro tunes. To its credit, the camera work is often sublime – long, silent shots make the monotonous set pieces appear sumptuous and rich.

Despite the change of medium, Daft Punk haven’t strayed too far from familiar territory. Electroma is infused with signature Daft Punk touches, not least being devoid of any form of dialogue or spoken word. Keeping it cryptic seems to have been the order of the day, and by refusing to use their own music this remains a decidedly low-key affair. As expected from a film directed by two of the most prominent figures on the European dance scene, music is an essential part of the film’s experience. Don’t quote me on this, but apparently if you play Daft Punk’s album ‘Human After All’ alongside Electroma the two sync-up perfectly.

Clocking in at little over an hour, it’s far fetched to call this a “proper” film, and what with its straight-to-DVD status and handful of festival appearances over Summer, its commercial appeal is clearly limited. It’s hard to imagine anyone but Daft Punk fans to be drawn to this film, but perhaps that’s not the point. If you like your art films with little panache but plenty of artsyness, Electroma will be right up your street. Arguably art for art’s sake, it might bore the rest of you silly.