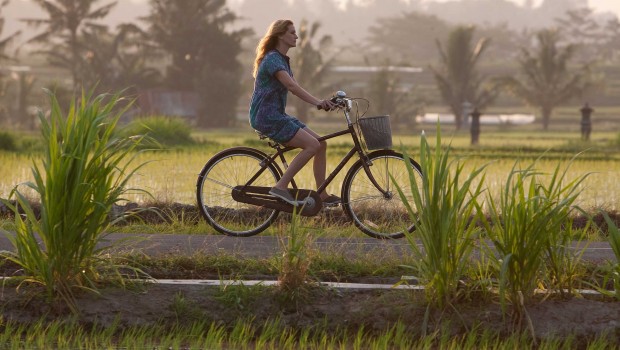 Summary: I found this film quite entertaining in a light, switch your brain off sort of way, but it is riddled with clichés and one dimensional side characters.

Julia Roberts returns to familiar territory as the lead in this romantic comedy drama from director Ryan Murphy, based on a best selling memoir.

Elizabeth Gilbert’s book about her painful divorce and attempts to find herself travelling the world has already sold millions of copies worldwide and so the screen version should have a set fan base in place already, although of course it also brings the pressure of being true to the book.

“I was of course aware of the book when I took on the role, but I didn’t feel too much pressure because Liz Gilbert was very understanding about the fact that making a film is very different to writing a book and was not intrusive on how the film was being put together,” Roberts told Futuremovies.

So far response to Eat Pray Love in the US has been mostly positive with the film taking $77m since it was released on August 13, but it has had a low key start in the UK taking just $1.8m in its opening weekend.

The plot sees Roberts as Gilbert going through a difficult divorce from her husband, Stephen (Billy Crudup), as they realise they have different goals in life, and walking straight into an affair with young actor David (James Franco). When that runs dry, she decides instead to drop everything and travel to Italy where she picks up a load of local friends and samples the country’s culinary delights, before moving on to a Buddhist retreat in India where she meets troubled Texan Richard (Richard Jenkins) who helps her through her life worries. On the final step of her journey she arrives in Bali where she seeks guidance from a local wise man and literally bumps into Javier Bardem’s character Felipe, a like minded soul who has also just gone through a painful divorce.

Bardem as Felipe only appears about three quarters of the way through the film when he crashes his car into Roberts as she is riding her bicycle, and it feels like he has literally been driving from the set of Vicky Cristina Barcelona into this role as he plays the confident Latin lover.

Although not a huge fan of Roberts, I found this film quite entertaining in a light, switch your brain off sort of way, but it is riddled with clichés and one dimensional side characters which detract from any sense that you are watching a thought provoking film about confronting the difficult choices in life.

Jenkins provides some rare moments of genuine emotion as he talks about his character’s earlier life as an alcoholic who destroyed his family life, and non professional actor Hadi Subiyanto is excellent as the Balinese wise man, but the rest are just side attractions in the Julia Roberts show.

“I like to be the centre of attention in a film with all the male actors in awe of me and appreciating my position as the central character,” Roberts joked to Futuremovies.

I don’t think the film will match the huge success of Roberts’ most famous film Pretty Woman or quite have the same mass appeal, but it should still attract the same female demographic.