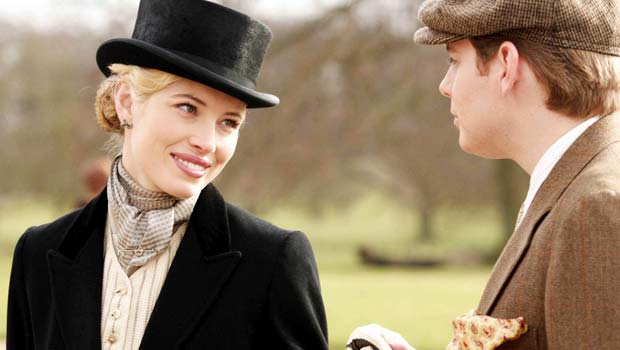 Summary: After almost a decade away from films, the Priscilla Queen of the Desert director seems to have rediscovered his mojo.

Adapting a Noel Coward play by throwing out the whole of the original script, except for the choicest of its witticisms, is not the expected approach from English period drama directors. But nine years on from his last feature as director, Australian Stephan Elliott has done just that, and in so doing he’s produced a funny, lightweight romp in that most staid of genres; the English stately home drama.

In truth, Easy Virtue doesn’t start out as anything special, introducing us to John Whitaker (Ben Barnes), a privileged young Englishman returning to the family home after a jolly old jaunt on the French Riviera, with his new American bride Larita (Jessica Biel) in tow. Needless to say the new Mrs Whitaker disrupts life at the family home, offending the propriety of John’s stern mother (Kristin Scott Thomas), intriguing and infuriating his sisters and slowly awakening something like life in his bitterly cynical and war-scarred father (Colin Firth). While moving along agreeably, the film’s first 30 minutes feel overly familiar, compounded by Scott Thomas autopiloting through a part she must have played at least twenty times, and only brightened by the occasional quip from Firth, who mopes around the stunning-looking location like an older, more jaded Mr Darcy.

But around the mid-way point things perk up, as Elliott brings the focus sharply onto the battle of wills between Larita and Mrs Whitaker. As the gloves come off, the film kicks into life with a series of very funny set-pieces, aided by a soundtrack peppered with contemporary songs redone in a jaunty ‘20s jazz style (yes, that is Sex Bomb you’re hearing). Biel’s performance impresses too, and the actress, who has previously amounted to little more than expensive set dressing, earns her top billing, revealing previously unsuspected talents. Larita is a more complex character than first impressions suggest, and Biel convinces when the script calls for depth, as well as in broader comedy moments.

Barnes is also good, transitioning from Prince Caspian’s brooding intensity to John’s naïve boyishness with ease. Elliott directs with a lightness and pace that is refreshing in a genre synonymous with rigidity, and while the story’s conclusion will be easy for most audiences to predict, Elliott ends things with a flourish that is genuinely surprising. After almost a decade away from films, the Priscilla Queen of the Desert director seems to have rediscovered his mojo, a suspicion confirmed by the fact that he has already begun production on his next, the curious-looking Black Oasis.