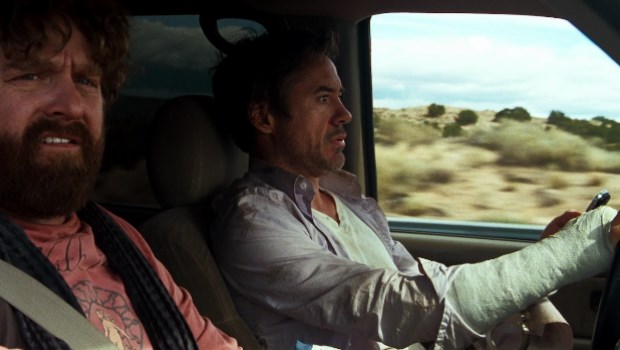 Summary: There’s really little reason to watch it when you could be watching Planes, Trains and Automobiles instead.

The odd couple road trip is practically a Hollywood sub-genre and the spectre of Midnight Run and Planes, Trains and Automobiles loom large over Due Date. That’s not a bad thing necessarily and the pairing of Robert Downey Jr. as an uptight architect and Zach Galifianakis as a pothead, wannabe actor is promising. Reteaming Galifianakis with Todd Phillips, director of the hugely successful but overrated The Hangover was obviously an attractive proposition for studio bosses.

Peter (Downey Jr.) and Ethan (Galifianakis) encounter each other at Atlanta airport, where a disastrous series of events leads to them both being kicked off their flight to Los Angeles. Peter is trying to get home before his pregnant wife (Michelle Monaghan) gives birth by C-section in three days, while Ethan hopes to appear in the execrable sitcom Two and a Half Men (it’s a nice touch that the film is decidedly ambivalent about the show). Slapped on the no-fly list, and without a wallet or identification, Peter is at the mercy of the eccentric Ethan who has rented a car and offers him a lift.

The two leads are fine and in a stronger narrative their chemistry might have carried the film. Over the course of a long and distinguished career in Downey Jr’s case and an impressive recent breakthrough in Galifianakis’, both have played versions of themselves masterfully. Downey Jr. is effortless here as the tightly wound Peter, never resorting to shtick and playing a drugs ingénue with a sly nod toward his hellraising past. He even showcases a sporadic mean streak that would have lost the audience in less accomplished hands.

For his part, Galifianakis offers another version of his slightly effete, bear-man-child persona, his annoying tics and traits a cover for profound despondency at the death of his father, whose ashes he’s carrying around with him in a coffee can.

Unfortunately, Ethan and Peter’s first meeting turns out to be the best part of Due Date. A nicely plotted airport intro conveys Ethan’s blithe carelessness and Peter’s superior, simmering impatience, releasing the pair to crank their personas right up. The potential stresses of plane travel are channelled exquisitely through Peter’s twitchy temper.

Notwithstanding Galifianakis’ ad-libs though, four writers, including Phillips, share credit for a patchy screenplay that veers wildly in tone, switching from slapstick violence to sentimental mush in a single scene. There’s surreal humour as Pete and Ethan get high to Pink Floyd, excessive use of comic car crashes, interspersed with more tender moments as Peter learns to see through Ethan’s boorish shell.

There’s also a foetal subplot involving Jamie Foxx that hints at a darker twist, but disappointingly it’s not followed through. Due Date is rarely funny enough to convince as an absurdist comedy and never deep enough to succeed as male-bonding melodrama.

Indeed, the trip feels like a series of loosely connected sketches. It begins to grind in a protracted stand-off with authorities at the US-Mexico border and a diversion to the Grand Canyon is predictable in both its arrival and execution. There’s really little reason to watch it when you could be watching Planes, Trains and Automobiles instead.