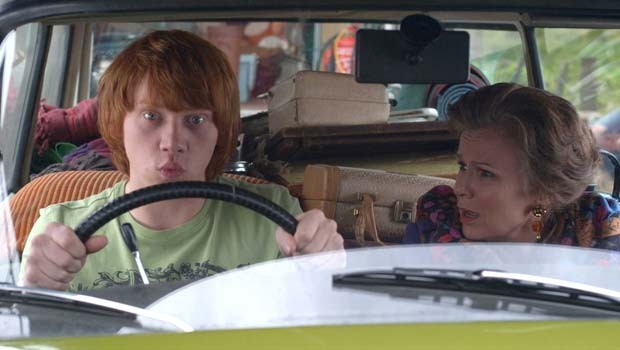 Summary: If you liked Calendar Girls, you’ll like this.

Seventeen year old Ben (Grint) has a pretty miserable existence. His massively, neurotically overprotective and domineering mother Laura (Linney) barely lets him out of her sight, while his vicar father (Farrell) hides in his study, reading about British songbirds, and ignoring the crisis in his marriage. While other kids look forward to the school holidays, the withdrawn and sensitive boy knows that for him it will be another round of Bible classes, driving lessons with his mother and helping out at a local old people’s home.

In a rare effort to break free, Ben answers an ad, and gets a job as assistant to retired actress Dame Evie (Walters). Evie is a character; simultaneously dignified, dramatic and curiously childish. She swears like a trooper, likes a drink, and is out of touch with the modern world. She has very little respect for conventions and before Ben knows it he’s off on a series of adventures; camping, performing Shakespeare in the garden, which culminate in a road trip to Edinburgh where Ben finally has the chance to interact with a girl more his own age, Bryony (Duncan).

Of course Laura is less than pleased, and responds by cutting Evie out of Ben’s life, and attempts to distract him by casting him as a tree in the church play, or spend time with Mr Fincham (Norton), their slightly odd lodger. But Laura has a secret life of her own, and the mounting tensions come to a head on the opening night.

Jeremy Brock, writer of Mrs Brown and the forthcoming Last King of Scotland, makes his directorial debut with Driving Lessons, loosely based on his own adolescence, and its this that simultaneously lends the film a veneer of truth and lets it down badly. It begins well; Ben’s early encounters with Evie are amusing; the camping trip very funny indeed – Julie Walters, playing Evie as a cross between Mrs Overall and Peggy Ashcroft, is a force of nature. Rupert Grint gives a game performance, but this is less his coming-of-age film than perhaps he’d hoped. His gift for comedy has already been well established in the Harry Potter films, but he may need to cast his net wider to really make that transition to adult roles.

The main weaknesses are in the script. Beginning quite ascerbically, it sadly descends into melodrama in the third act. Ben’s speedy deflowering at the hands of Bryony feels more like an adolescent fantasy than truth, and as the film goes on and Evie softens towards Ben, she becomes correspondingly less interesting. The last reel is slightly bizarre, as if Brock had run out of ideas. But if you liked Calendar Girls, you’ll like this; with such a strong and likeable performance from Julie Walters at its heart, its sweet enough.