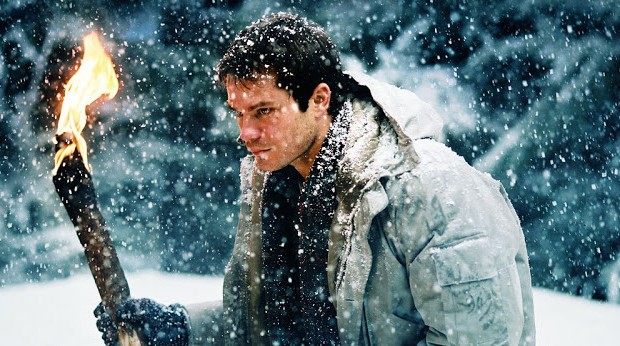 It must surely be obligatory in reviewing any movie based on a Stephen King novel to muse how adaptations of the horror geek’s work range from the sublime (The Shining, Misery, Carrie) to the ridiculous (Sleepwalkers, The Dark Half et al). If the first hour of Dreamcatcher is most definitely in the first camp, a genuinely taut thriller that promises big things, the second half rapidly plumbs the depths of Stephen King hell. But, hey, don’t worry – it doesn’t quite reach the near-impossible lows of Maximum Overdrive.

Four lifelong friends with an unusual telepathic power, head out into the snowbound forests of Maine for a weekend’s hunting trip. Their bonding is forced to take a backseat, however, when it when it becomes clear something very wrong is stirring deep inside the woods. In a nicely creepy scene they watch in bewilderment as animals flee from its cover, and the appearance of a feverish, flatulent hunter spells much worse to come. They find themselves pitted against an enemy they’ve been prepared for all along, and the fate of the entire human race comes to depend on their success.

There’s a number of familiar King motifs here – the crude, hard-bitten dialogue, the Misery-style snowbound locale, the oddly touching Stand By Me flashbacks. And the first hour builds up the intrigue nicely, helped along by uniformly wonderful performances from the leads. Lewis in particular marks himself out as one to watch. With the arrival of the aliens and ‘shit-weavels’ the film still holds out the promise of heading in new, unexpected directions. It doesn’t. The army, under Colonel Curtis (Freeman, not even breaking a sweat), arrive to wallow in clichés like pigs in mud, and the whole B-movie alien takeover scenario is paraded with little deviation from the blueprint. Lewis’ bizarre possession by the English-voiced alien is admittedly entertaining in a Raising Cain kind of way, but there’s no excuse for Donnie Wahlberg as a mentally handicapped Scooby Doo-quoting alien. No excuse at all.

Its almost as if Kasdan himself has been replaced by a mind-altering alien at the halfway point. The first hour works so well perhaps because it plays to his strengths of warm ensemble pieces, as in The Big Chill and Grand Canyon. Part of the subsequent problem is down to Kasdan’s and acclaimed co-screenwriter William Goldman’s inability to sift through the padding that accompanies most of King’s longer novels. What we’re left with is an episodic structure, which may have worked in The Empire Strikes Back and Return of the Jedi (which, of course, Kasdan co-scripted and borrows some stylistic techniques from), but here makes for an increasingly messy film. In particular, Freeman and Sizemore’s roles become totally irrelevant, though by the time the film ends in a pitiful whimper there’s little left to care about anyway.

Dreamcatcher does retain a kind of hokey enjoyment factor throughout, but it’s a crying shame it’s not the film it could have been. Still, there’s little doubt this will stop the King movie juggernaut rolling on for many more years yet.