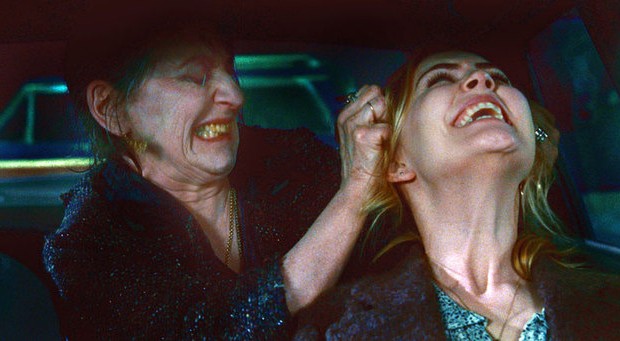 Drag Me to Hell Review

Drag Me to Hell slots neatly between Sam Raimi’s two triumphant franchises, combining the energy, shocks and sick laughs of The Evil Dead movies with the slicker, populist thrills of his Spider-Man adventures. The result is one of the most unashamedly fun mainstream horror flicks of recent memory.

Alison Lohman is ridiculously appealing as Christine, an ambitious loan agent competing for a promotion with a smarmy co-worker (Reggie Lee). In the hope of impressing her boss (David Paymer), Christine turns down the desperate appeals of an old gypsy lady (Lorna Raver), who begs for the bank not to repossess her home. In revenge, the woman places an ancient curse on Christine. It’s not long before our hapless heroine is being subjected to a wild succession of terrors, including being tossed around her room by an unseen spirit, blood spurting from her nose and eyes appearing in her pudding. And unless she can somehow appease the evil spirit, far worse is to come…

Raimi proves that he hasn’t lost the ability to pull off first-rate frights in the 29 years since the first Evil Dead movie, and there are some fantastically scary sequences here, from the old woman’s face suddenly emerging from shadows to a tense, unpredictable séance sequence. But this is actually a far funnier movie than you’d guess from the trailers, and Raimi sprinkles the colourful action with gallons of goo and slapstick fights that recall Ash’s frenetic battles with the undead.

Even in the scariest moments, the emphasis is very much on keeping a smile on the audience’s face: in terms of horror movies, this is the polar opposite of something like Martyrs. The lack of extreme violence, along with the slick visuals and high production values, means this is a movie that possesses broad mainstream appeal, but it does it without resorting to the bland, watered down scares of the majority of PG-13 chillers of recent years.

As you’d expect from Raimi, the editing and camerawork crackle with energy (including the occasional trademark crash-zoom), and the action barely pauses for breath. But the key to Drag Me to Hell’s success is its attention to character. Christine has plenty of unusual character detail that is cleverly introduced without the need for laboured exposition: for instance, we learn, that this former farm girl used to have a weight problem following her father’s death, and the shock of what’s happening drives her to tubs of ice-cream. Even the minor characters are unusually well-developed, with a likeable Justin Long in the role of Christine’s rich but supportive boyfriend, and Dileep Rao brooding magnificently as the intense medium who takes American Express.

If anyone had written Raimi off as something of a spent creative (if not commercial) force after the disappointing Spider-Man 3, Drag Me to Hell reasserts his ability to make classical narrative pictures with style, wit and verve. It’s a blast from start to finish, and we demand a sequel immediately.