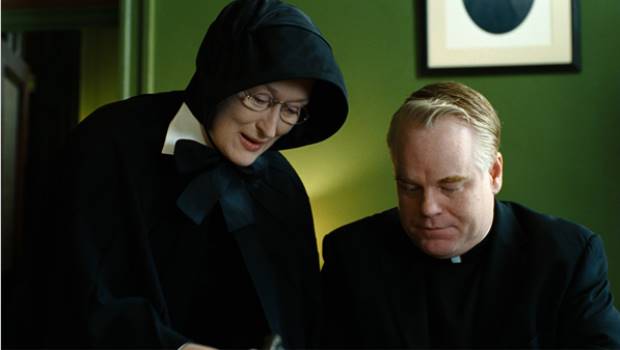 Summary: Such high-minded writing is noticeably rare in contemporary cinema.

As its title suggests, John Patrick Shanley’s new film deals in uncertainty. Set in 1964 in St. Nicholas, an all boys Bronx school, the film centres on a case of suspected misconduct involving Philip Seymour Hoffman’s Father Flynn and the only black pupil in the school, Donald Miller. But while domineering Sister Aloysius (Meryl Streep) is convinced of Flynn’s guilt, the younger Sister James (Amy Adams) is unsure and Flynn himself maintains that he has done nothing wrong. With no clear evidence on either side of the argument, Shanley has the perfect scenario with which to investigate his theme, established in Hoffman’s opening line, “what do you do when you’re not sure?”

The writer/director makes it clear from the start that he has no desire to provide easy answers, introducing the two contrasting authority figures in a way that immediately places the audience’s sympathies with the liberal and compassionate Flynn as opposed to the strict and intolerant Sister Aloysius. But Hoffman’s impressive performance ensures that we sense inconsistencies in Flynn’s character, and despite Sister Aloysius’s infuriatingly self-righteous assertion that she “knows people” being her only justification for taking against him, we understand her perspective and can’t just dismiss her.

Shanley directs from his own adaptation of his hit play, so it’s no surprise that the film is all about the words characters speak. Director of photography par excellence Roger Deakins (No Country for Old Men, Assassination of Jesse James) ensures that Doubt is always visually interesting, but no amount of skewed camera angles can hide the fact that what really matters here is the language; Shanley is interested in investigating the space between words and meanings, particularly the question of how successfully, or not, words can pin down truth. When, in a key scene, Father Flynn tells Sister James that “there’s nothing wrong with love” we sense this question keenly – there are at least three different ways to interpret the statement in its context.

Such high-minded writing is noticeably rare in contemporary cinema, hence the big names in Doubt’s cast and the amount of awards nominations they have garnered, but it also brings with it the opportunity to overact, something Streep is occasionally guilty of here. In particular, the way she attacks the dialogue in the film’s central confrontation scene may be a little too much for some audiences to take seriously, and Hoffman is compelled to take his shouty righteous anger to a whole new level just to keep up with her. Shanley is a good director though, and largely keeps his actors in check. More than this he is an excellent writer, and uses the central situation to ask substantial questions about faith, equality and truth.