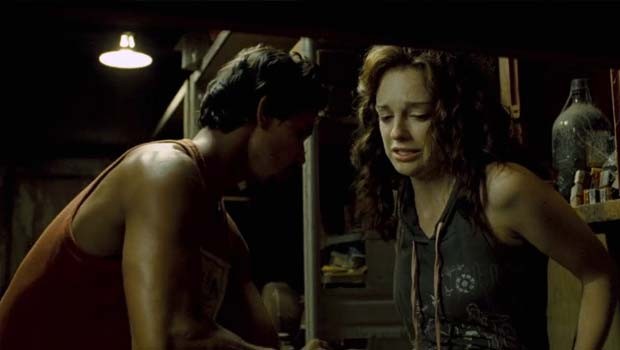 Destricted is a collection of seven films by well-known artists and film-makers including Sam Taylor-Wood, Gaspar Noe and that old provocateur, Larry Clark. ‘It aims to bring together sex and art; a platform for all forms of uncensored artistic expression; manipulating and embracing the expression of sex through art.’ I have no idea what this means. What I do believe though is that Destricted is much less about sex and much more about pornography; in this aspect it’s quite revealing.

So. Seven films. Number one is called Hoist; directed by Matthew Barney, it features a naked, erect black man, strapped to the underbelly of a fifty ton truck. He wears a lots of greenery in his hair and has a gourd stuck up his bum, and rubs himself repeatedly against the throbbing driveshaft of the vehicle, which is thickly coated with white lubricant. I am not making this up. Anyone with a smidgeon of understanding of semiotics will read this as primitive man versus technology. What’s sad is that it’s so absolutely literal as to be totally undemanding, mildly racist, and at fourteen minutes is far too long.

Clark then goes on to cast one of the boys in a film. Five or six actresses come in for casting; one, 40-year old Nancy, is all over our hero, and she gets the part. Watching her give him a blow job while still wearing her huge white trainers is oddly poignant.