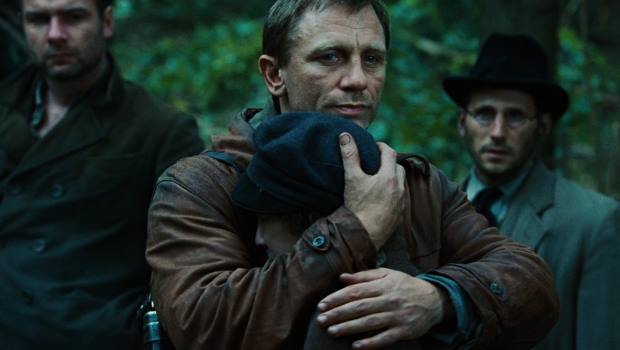 Summary: The finished picture proves how easy it is to take a fascinating story from history and push it so firmly through the Hollywood machine that it loses everything that made it worth telling in the first place.

In our ‘reality’ obsessed culture, it seems merely basing films on true events is not enough any more. Like Clint Eastwood’s Changeling, Ed Zwick’s new film begins with the phrase “a true story”, as if to say that all that follows is not just based on real events, it’s exactly what happened. While in the case of Changeling this worked in the film’s favour, as the events it retold were so outrageous that they needed the “true story” stamp to be palatable to an audience, in Defiance the exact opposite is true. It’s a story that is populated with familiar character types and unfolds according to well-worn storytelling clichés that will surprise no-one with a passing knowledge of Robin Hood: Prince of Thieves, Braveheart or Last of the Mohicans. Zwick has successfully removed the spark of truth from this story by drowning it in Hollywood convention.

This would not be such a problem if Defiance had even half the excitement of the above-mentioned films, but the Blood Diamond director determinedly keeps the mood sombre and the pace sluggish, with only a smattering of action moments hinting at what a great adventure yarn this could have been.

The story concerns three brothers, Belarussian Jews who go into hiding in the forest after their parents are killed by Nazis. When the oldest, Tuvia (Daniel Craig), goes to the home of the Nazi commander responsible and kills him and his sons, other Jews begin to gather in the forest, sensing in Tuvia a leader they can believe in. Despite his initially violent methods, Tuvia decides that survival is more important than retaliation, and leads the creation of a self-sustaining community, hidden in the forest. While the youngest brother Asael (Jamie Bell) is fully behind Tuvia, the middle sibling Zus (Liev Schreiber) tires of his refusal to tackle the Nazis, and it is only a matter of time before he and Tuvia clash.

There are flashes of greatness in the film, most notably a sequence that cross-cuts between a makeshift wedding in the forest community and a nailbiting ambush on a Nazi tank led by Zus, but more often the film tends towards monotony. This is emphasised by the unchanging browns and greens of the colour palette and Craig’s dour performance. Schreiber is much better, partly as he is more comfortable with the Eastern European accent, but mainly as he has the more compelling character. In fact, when Zus leaves the group the film loses considerable momentum; it would arguably have been more interesting for Zwick to have followed his story than staying with Tuvia in the forest.

Defiance is based on the thoroughly researched book of the same name, so there clearly was a compelling human story to be told when this project began. Unfortunately the finished picture proves how easy it is to take a fascinating story from history and push it so firmly through the Hollywood machine that it loses everything that made it worth telling in the first place.