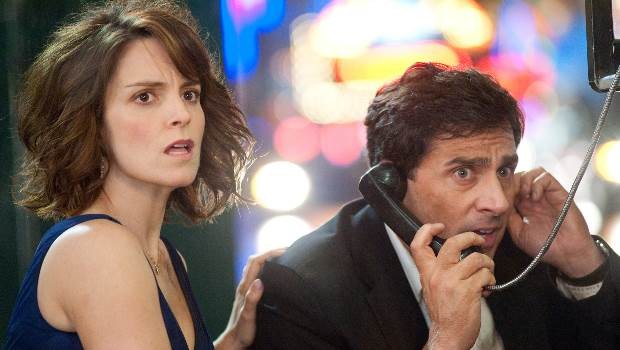 Summary: The two leads are accomplished enough to make the more formulaic elements seem fresh and supporting cast are a significant factor in the film’s appeal.

A romantic action comedy, Date Night entertains thanks to the comic chops and chemistry of its two leads. Steve Carell and Tina Fey ought to have been paired on the big screen before now and it’s to be hoped they’ll be granted the opportunity again soon, because they carry this tour-de-farce about a married couple seeking to reinvigorate their marriage.

Night at the Museum director Shawn Levy permits himself a contrived car chase, but otherwise reins in his devotion to madcap action, producing a warm film that will strike chords with long-term couples.

As Phil and Claire Foster from New Jersey, Carell and Fey find that their kids and work absorb all of their time. Friday evening date nights have become a predictable ritual, their sex life moribund. When their friends Haley and Brad (Kristen Wiig, Mark Ruffalo) announce they’re splitting up, both start to worry that they’re heading down the same path, that of becoming friends without benefits.

Stung into action, Claire dresses flirtily and Phil proposes dinner at an absurdly elitist Manhattan restaurant. When they’re told they have no chance of a table and another couple fails to show, Phil spontaneously adopts the absentees’ name, The Tripplehorns, and steals the booking.

The plot hinges on this fateful decision, as two thugs (Jimmi Simpson, Common) appear and politely insist that the “Tripplehorns” accompany them outside to discuss business. Crossed wires about a clip drive of interest to their boss and a trip to the Central Park boathouse set in motion breakneck encounters with a buff security specialist (Mark Wahlberg), a quizzical detective (Taraji P. Henson), petty criminals (Mila Kunis and James Franco) and a mafia boss (Ray Liotta).

The supporting cast are a significant factor in the film’s appeal. Wahlberg clearly relishes his role and the best scene in the film contrasts Franco and Kunis’ troubled but loving relationship with the Foster’s more staid, middle-aged version. Other sequences though, like the Fosters performing a pole dance for a kinky district attorney (William Fichtner) were doubtless funnier in the script, and there are moments when the film’s comic momentum and pathos are frustratingly squandered to satisfy the demands of its thriller pretensions.

The rote action is supplemented by an awful lot of unremarkable slapstick. Nevertheless, it’s compelling the way Date Night shows danger reinvigorating a relationship. The two leads are accomplished enough to make the more formulaic elements seem fresh, while at the same time allowing moments of emotional honesty, of the resentment and boredom in their marriage, to shine through.

The extent to which Carell and Fey improvised their lines is perhaps betrayed by the end credits, which finds them ad-libbing outtakes that are funnier than most of screenwriter Josh Klausner’s script.