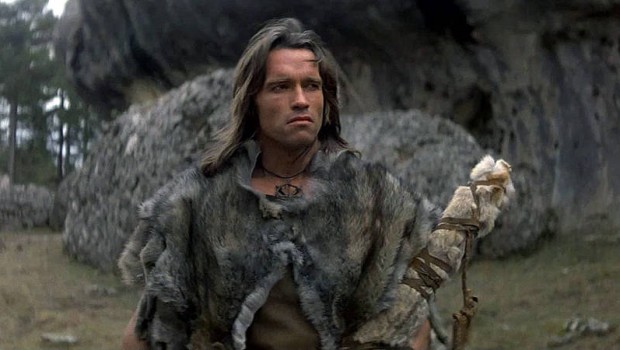 Since his creation in the 1930s by prolific pulp writer Robert E. Howard, Conan the Barbarian has been successfully rebooted for successive generations. Howard’s stories for Weird Tales magazine were repackaged as hardbacks in the 1950s, while in the late-60s they were given a new lease of life in the form of paperbacks boasting iconic Frank Frazetta artwork. In the 1970s, Marvel launched a comic series about the character’s exploits and then, in 1982, Apocalypse Now screenwriter John Milius directed Arnie in this big-budget movie version, which spawned a cheaper sequel two years later.

This Blu-ray is timed to tie into the latest incarnation of Conan, the new fantasy epic starring Stargate: Atlantis’s Jason Mamoa as the taciturn warrior. Yet it’s difficult to imagine the new film coming close to matching Milius’s in terms of bombast or spectacle. As Conan moves from slave to fighter, and from thief to warrior, the action is bloody and often hysterical. There’s little in the way of nuance or subtly – and that fits the character perfectly. Conan is a visceral figure who thinks with his fists and sword rather than his head; a musclebound man-mountain who uses any means necessary to slaughter his enemies, whether they’re human, animal or teeth-gnashing monster.

Milius attempts to show us why Conan is the way he is. In the opening scenes, young Conan watches his village burned to the ground and his parents murdered by softly-spoken despot Thulsa Doom (played by a wonderful, subtly sinister James Earl Jones). The boy is sold into slavery and then into low-rent gladiator battles, evolving into a great warrior along the way. He eventually teams up with thieves Valeria (Bergman) and Rexor (Davidson) to rescue a princess from the clutches of a snake cult and satiate the thirst for vengeance that consumes him. Yet despite being motivated by sex, riches and revenge, Conan possesses a flicker of integrity and morality that’s rare in the world he inhabits – meaning we’re allowed to find him a sympathetic sort of anti-hero.

This was the role that turned Schwarzenegger into a household name, and the former bodybuilder is perfect, bringing out both the character’s imposing physical presence and his brooding quality. Conan isn’t a man of many words, which is just as well as when Arnie does have to deliver the occasional monologue (“I remember days like this when my father took me to the forest and we ate wild blueberries…”), it sounds pretty silly.

But then Conan the Barbarian’s silliness is part of its appeal. From the warrior’s battle with a super-sized snake to the poodle-haired henchmen who look like refugees from Bon Jovi, the film is stuffed full of laugh-out-loud moments, some intentional, some not, and the tone veers from lofty and sombre to high-camp. At the same time the big budget allows the film a lush, epic look which most 80s fantasies (including Conan the Destroyer) could only dream of: images such as Conan languishing on the Tree of Woe or Thulsa Doom’s hedonistic temple (complete with hands-and-feet soup) still look incredible nearly 30 years on, especially on Blu-ray. And in Basil Poledouris grand, thunderous score, the movie also boasts one of the decade’s best soundtracks.

All this, plus the sight of Arnie punching a camel unconscious!

Milius and Schwarzenegger’s commentary offers up warm recollections of the production process, while the decent ‘Making of’ documentary outlines the complications and in-fighting that plagued the five years of pre-production. Milius recalls how Oliver Stone inspired him by introducing him to the character, but that they rejected Stone’s script – though the outspoken Platoon director (who talks candidly on the documentary) retains co-writer credit.

There’s also a nice featurette on Conan’s history, an interview with the film’s sword-masters, deleted footage (including the death of Max Von Sydow’s King Osric) and production stills.