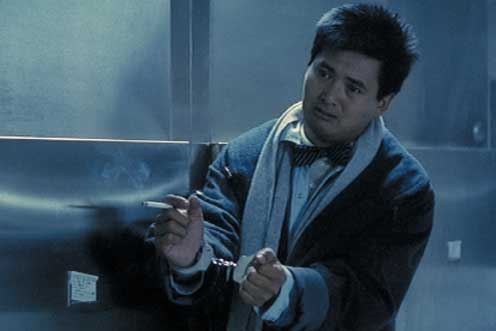 Like many people I first came across City On Fire in the wake of Reservoir Dogs in the early 90s. It was an Empire magazine feature drawing the similarities between Tarantino’s celebrated debut and (in the UK at least) a less well-known Hong Kong gangster movie – and a film Tarantino took care to avoid mentioning when promoting his movie. Now of course City On Fire can be re-released on the wave of such publicity – “the original inspiration for Reservoir Dogs!” – and this month City On Fire hits the shelves in a re-mastered special edition. But how does the movie itself hold up? The answer is very well indeed.

Ko Chow (Fat) is a disillusioned cop reluctantly roped in for that classic ‘one last case’ by his Police Inspector uncle (Sun). Chow is recruited to go undercover and infiltrate the gang responsible for a series of high-profile diamond robberies in Hong Kong and, as his superiors squabble over the best methods to crack the case, Chow finds himself accompanying the gang on a heist that goes disastrously wrong. As he becomes increasingly close to charming gangster Fu (Lee), Chow finds his loyalties painfully divided, and he is forced to choose between his duty as a police officer and his allegiance to the gang.

Perhaps unsurprisingly, City On Fire only shares fleeting similarities with Tarantino’s movie. Yes, you can certainly see the parts where Tarantino pays homage to/rips off the film – particularly the warehouse-set finale or the two-handed blasting of the police van – but you won’t find any Little Green Bag-style numbers or ear-slicing here. You can equally see the influence of City On Fire – and similar Hong Kong cops-and-robbers movies – on many other Hollywood ‘undercover cop’ movies such as Point Break; but there’s also no denying that this is also a movie that takes much from European and American gangster pictures in its own right.

The important thing is that City On Fire is a taut, well-plotted and occasionally very funny thriller that is glued together by Lam’s fast-paced direction and a typically charismatic lead from Chow Yun Fat at the height of his game. Fat is one of those actors that can effortlessly drift between broad comedy and tortured intensity with a convincing ease, and Ko Chow makes for one of the most unusual, interesting characters in Fat’s long career. Lee (Fat’s co-star in The Killer amongst others) is also a deeply charismatic actor and here, away from his usual cop role, Lee helps challenge viewers as to who exactly they’re supposed to be rooting for.

Within City On Fire you’ll find a whole panoply of memorable scenes from the tense, violent heists to the unique car chase set to Christmas music with coloured streetlamps bouncing off the windshields! The dialogue meanwhile does throw down a few standard cop clichés, but mostly it successfully combines tough-talking macho posturing with noirish metaphysical exchanges about life, love and fate. It may lack the breathtaking action of, say, The Killer – probably the finest example of the genre – but Lam gets the balance just right between action, comedy and doomed romance (with Naked Killer’s Ng as Fat’s tough-but-weary girlfriend). Lam has pretty miserably failed to replicate his Hong Kong success in Hollywood (making THREE films with Jean Claude Van Damme probably wasn’t the wisest of career moves), but City On Fire shows that given the right conditions he really is a director to get excited about.

Forget Reservoir Dogs. City On Fire deserves to be seen on its own terms. And those terms are an amusing, thrilling gangster picture that modern Hollywood can all-too-rarely match.

OK, so fans may be disappointed at the lack of interviews with Chow Yun Fat, Danny Lee or Ringo Lam. But you do get an exclusive interview with City On Fire’s cinematographer Andrew Lau (who went on to co-direct the smash hit Infernal Affairs) who provides a snapshot of the Hong Kong film industry. Lau talks us through the bold filming decisions on City On Fire’s shoot including utilising fluorescent lighting to give the movie a unique colour texture and incorporating location shooting on Hong Kong’s busy streets, something relatively unusual at the time. There’s also an interview with Roy Cheung (City On Fire’s arrogant Police Inspector John Chan), who makes a few intriguing points between assuring us that Ringo Lam was like his ‘wiser, older brother’ (touching stuff!). Best of all is the commentary by Hong Kong film expert Ben Logan, and which has to be most illuminating commentary in months. Within the first five minutes we learn that the literal translation of the film’s title is ‘Dragon, Tiger, Wind, Cloud’, are given a brief introduction to the studio behind the film and learn that the actor who plays the undercover operative in the opening sequence (‘Elvis’ Tsui) is best known for porno movies and has released a rather esoteric picture book of himself posing naked! Logan’s commentary continues to give us roughly a new fact every second and covers the themes, the shoot, the history of every on-screen actor, the entire ‘heroic bloodshed’ genre and, well, pretty much anything you ever wanted to know about City On Fire really.