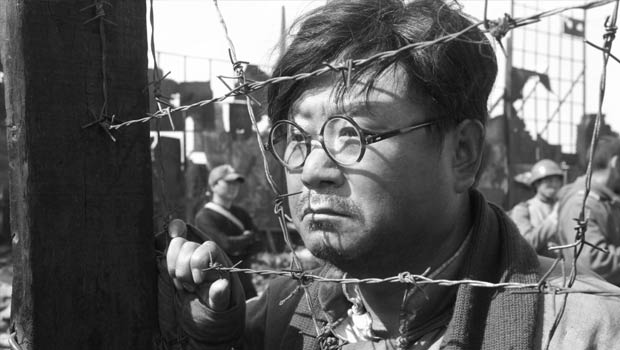 City of Life and Death Review

Summary: Although difficult to watch, the film packs an extremely powerful punch .

Lu Chuan’s City Of Life And Death (Nanjing! Nanjing!) is the most brutal, but brilliant, war film I have seen in a long time. From start to finish it is un-relentlessly harrowing in its depiction of the Rape Of Nanking in which thousands of Chinese civilians were raped and killed by Japanese soldiers just before the Second World War.

Lu deliberately chose to shoot the film in black and white to emphasise the dark and somber reality of the historical events, which have until now just been a footnote in the annals of history.

Set in 1937, the film begins with the arrival of the Japanese soldiers in Nanking, the former capital of China, with Beijing and Shanghai having been defeated. The city is already in ruins from an onslaught of bombings and most of the senior Chinese military officials and foreigners have already left. All that remains is a small pocket of resistance fighters, thousands of Chinese refugees and a handful of foreign aid workers, including an old Nazi called Mr Rabe.

Any form of resistance is soon squashed and the rest of the film is about how the Japanese go about taking complete control of the city through disgraceful sexual acts and mass murder.

Much like Saving Private Ryan, the derelict landscapes and scenes of war, are brought to life in stunningly realistic fashion, but unlike Spielberg’s film there is no sense of team bonding or any sign of humour, only snapshots of characters in ever more desperate stages of despair, including on the Japanese side in the form of sergeant Kadokawa (Hideo Nakaizumi), a disillusioned soldier appalled by all he sees.

The character we feel most sympathy for, and attachment to is Mr Tang (Fan Wei), a Chinese assistant to Mr Rabe, who nievely believes his family will be kept safe by his position alongside the old Nazi, but who soon discovers no one is immune to the brutal treatment of General Lu, (played by an excellent Liu Ye), leading to the most appalling scene I have ever witnessed on film.

The director spent four years researching the script and studied in Nanjing to make sure the film was as accurate as possible in its portrayal, and it shows. Lu is also very adept at drawing the audience in to the action and evoking sympathy or disgust in equal measure, something he also mastered with his previous films Mountain Patrol about volunteers protecting antelope from poachers in Tibet.

City Of Life And Death was surprisingly ignored by the Venice Film Festival and was given only a bit part in the Toronto line-up last year, but was given its rightful place in official competition at the San Sebastian film festival where it walked away with the top prize, and has since picked up a couple of Asian Films Awards.

Although difficult to watch, the film packs an extremely powerful punch and is well worth watching if you can find a cinema to view it in when it hits the UK on a limited release this Friday (April 16).