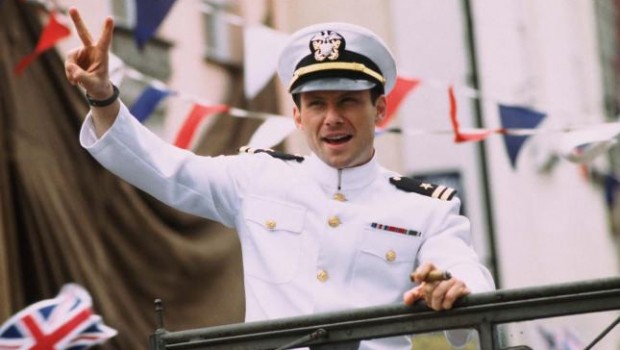 Christian Slater. Neve Campbell. Harry Enfield. Reeves and Mortimer…Hmm. You approach Churchill – The Hollywood Years with a certain apprehension, knowing that it could either be an oddball work of genius or an unmitigated disaster. Your instincts tilt towards the latter. And your instincts prove to be entirely justified.

The hard-to-fathom plot opens with modern day Hollywood execs trying to persuade “President Blair” that Winston Churchill was really an American GI, an actor-for-hire having supplied the face history has come to recognise. Cut to Hollywood’s spin on the tale as the cigar-chomping Church (Slater) arrives in London with buddy Eisenhower (Malco). When they stumble across a conspiracy to hand Britain over to the Nazis, the duo join forces with the plucky Princess Elizabeth (Campbell) to rescue Blighty from Hitler’s evil clutches.

If Churchill: The Hollywood Years sounds awful that’s because it is. I mean, it’s just a really bad idea for a film. The poorly structured farrago of a story leads to a clumsy, awkward tone throughout that’s not, unfortunately, even countered by some decent jokes. You get the impression that the film would love to be seen as a Top Secret! for a new generation. Instead, the lines dished out feel like they belong in one of those terrible spin-off movies of the 70s – you know, Man About the House, Are You Being Served? and the like. Which might be fine if this was 1973. But it’s not. And having Dead Ringers’ Jon Culshaw bookend the film as Tony Blair doesn’t make it any more cutting-edge or relevent.

To be entirely fair there are three or four mild chuckles, mainly down to Enfield’s moronic king (two thirds Nice-But-Dim and one third Kevin the teenager) and Campbell does offer up a surprisingly winning comic performance. The film could also double up as a particularly good drinking game, downing a shot every time a British sitcom stalwart appears – “There goes Mackenzie Crook!” “Hey, there’s Rik Mayall!”

Otherwise there’s little else to redeem the movie. It bludgeons its one joke (on Hollywood’s re-imagining of history) to a rather horrible death and leaves little in its wake except some wince-worthy “post-modern” moments (Churchill and Eisenhower performing a rap at the King’s ball) and a sprinkling of lame Carry On style double-entendres and crudity.

Director Peter Richardson was once a pioneer of British alternative comedy, and in his contribution to the rather nifty Stella Street he’s shown that his talents haven’t entirely deserted him. But you’d never know it from this dreadful mess of a movie. It makes Richardson’s 1991 effort The Pope Must Die look like a bona fide classic.