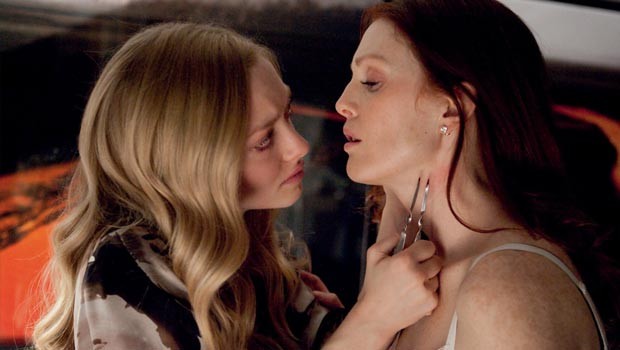 Summary: While sex is clearly an ongoing theme throughout the movie, there is more depth to the story and characters than simply love making.

The most striking thing about multi award-winning Canadian director Atom Egoyan’s film Chloe is the actress Amanda Seyfried who plays the title character. The transition from teeny bop all singing, all dancing angel girl in Mamma Mia last year to sexy seductress escort girl in this film is shocking and at times makes for uncomfortable viewing (although not as uncomfortable as sitting through Mamma Mia I hasten to add).

But that is the idea and the appeal of this darkly disturbing relationship drama. Chloe is hired by a wealthy doctor, played by a neurotic and emotionally fragile Julianne Moore, to seduce her handsome husband David (Liam Neeson), a professor whom she believes is cheating on her.

The idea behind the agreement is to see if David takes the bait and then confront him, but Chloe decides to take it a little further and starts describing in graphic and sordid detail to Catherine how her relationship with David is progressing, which surprisingly turns Catherine on as it takes her back to her early days with David when their own relationship was more steamy. But things soon get out of control as Catherine and Chloe also strike up a relationship, and Chloe then seduces another important member of the inner circle.

While sex is clearly an ongoing theme throughout the movie, there is more depth to the story and characters than simply love making. We get to explore the fragility of relationships and the ease with which jealousy and bitterness can easily overpower the importance of trust and caring for one another.

Moore plays the role of a despairing, desperate wife and lover very well, although her familiar over exuberance gets the better of her at times to the point of overacting. And while we feel for her plight in the most part, there are intriguing and clever twists and turns when the tables are turned. Neeson is also very good as the aging lothario, although we don’t get to see his true colours until very late on.

But it is Seyfried as Chloe who steals the show, oozing sexual energy while at the same time revealing alarming ‘Basic Instinct’ tendencies; thus proving that she has a more diverse range to her repertoire than simply playing a bubbly blonde.

The director’s influence is also palpable throughout the movie. The two-time Oscar nominee proves he is no novice at making dark dramas with his intelligent manipulation of the characters and dark settings, which set the mood perfectly for the tense dramatic scenes.

The only obvious gripe I have with the film is the ending, which is staged as a happy one, but with obvious ambiguity as to the outcome of everyone’s circumstances. That in itself is fine, but the small hints that everything is not as it seems are a little unusual and not really in keeping with the characters’ behavior until that point. You’ll see what I mean when you watch the film next year.