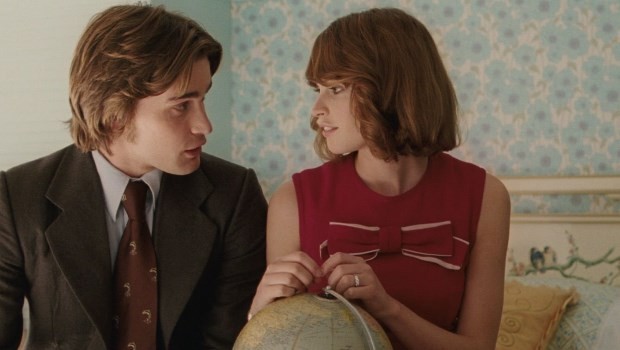 Summary: With accomplished performances from its young, unknown leads, in the process demonstrating that The Office duo are more than capable of handling a 90 minute comedy-drama arc.

A departure from Ricky Gervais and Stephen Merchant’s painfully acute observational humour and the former’s tongue-in-cheek, on-screen egomania, Cemetery Junction is a statement of broadening ambition from the duo. A coming of age saga set in 1973, of three 20-something lads in Reading’s Cemetery Junction, it’s brimming with clichés of working-class angst. But there’s an assurance to the storytelling and more than enough laughs and cringeworthy moments to satisfy Gervais’ fanbase.

Freddie (Christian Cooke) is determined to avoid the soul-crushing life on the factory floor of his father (Gervais) and best friend Bruce (Tom Hughes) by succeeding as an insurance salesman. Bruce meanwhile, is a rebel without direction, desperate to escape yet spending his nights flirting, fighting, flirting and in the police cells. Finally Snork (Jack Doolan) is the trio’s clown, or Karl Pilkington of the group, the train station’s bespectacled platform announcer, socially ill-equipped and a loose cannon with women.

Freddie’s ambition pricks at the brooding Bruce’s complacency as the latter shares a grim domestic life with his workshy father (Francis Magee). But when Freddie bumps into his childhood sweetheart, Julie (Felicity Jones), daughter of his new boss (Ralph Fiennes), it’s her longing for travel and adventure that begins to make him reassess his own material outlook. She too though, seems doomed to emulate the ignored existence of her mother (Emily Watson).

Gervais and Merchant’s leafy vision of seventies suburbia never seems too unpleasant – there’s no mention of the period’s high inflation, oil crisis or three day week for example. But a suffocating atmosphere pervades everything, epitomised by the laughably stuffy “Winner’s Ball” hosted by Freddie’s work.

With increasing number of supporting characters and sub-plots, including a deliciously greasy turn from David Earl as his cafe-owning alter-ego Brian (Gittins), the film starts to creak under its caricaturing, from Freddie’s home life (a bickering Gervais, Julia Davis and Anne Reid cheekily foregrounding the racism of the era) to Fiennes’ working-class boy made good, who’s turned his back on his roots and become a monstrous chauvinist. At the other end of the social spectrum, Bruce’s father is always discovered getting slowly drunk on the sofa.

Snork’s ‘specialness’ becomes an over-relied upon source of laughs. And there’s a checklisty feel to the way the film ticks off issues of class, gender and the breakdown of the family unit, with each of the central characters denouements all more or less signposted. Nevertheless, Cemetery Junction possesses real warmth and is skilfully realised, with accomplished performances from its young, unknown leads, in the process demonstrating that The Office duo are more than capable of handling a 90 minute comedy-drama arc.