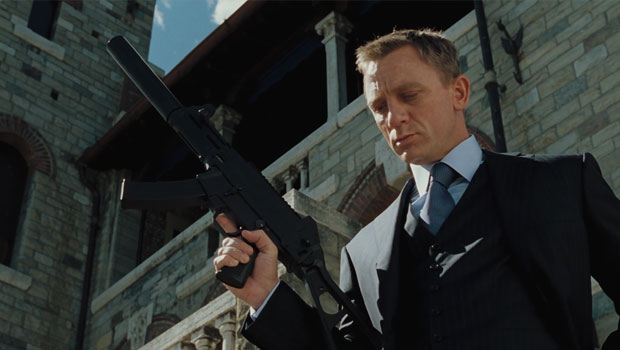 Summary: "...doubts were soon put to rest as he became more assured as the film progressed, easily carrying the weight of expectation on his broad shoulders"

The reinvention of 007 after a successful run with Pierce Brosnan in the lead was a big gamble for the film’s producers, Barbara Brocolli and Michael G Wilson, especially with a blonde actor playing the lead. But Casino Royale has proven all the doubters wrong by playing a winning card with Daniel Craig.

I was lucky enough to see the first ever screening of the film at the Odeon Leicester Square, although unlucky enough to be behind Jonathan Ross’s son in the queue for my popcorn as he repeatedly kicked me in the leg. That aside, the excitement and anticipation could be felt rippling around the packed theatre as the curtains parted and the opening scene to the 21st Bond movie unfolded, and what an opening it is to…

The smooth, swarthy, lothario of previous Bond incarnations has been replaced by a cold, ruthlessly efficient edgier agent who dispatches his first target in the opening scene in a brutal, physical battle in a toilet. This is Bond before he is given 00 status, based on the first Ian Fleming novel, Casino Royale, written in 1953. His second kill depicted in a black and white sequence feels like a homage to the book’s Cold War roots and results in Bond achieving his 00 status. The film then takes a more familiar path with Craig travelling the world, taking in Madagascar, Nassau and Miami, in search of the bad guys.

Bond’s main rival this time is Le Chiffre (Mads Mikkelsen) a man who has grown rich financing international terrorism. The cat and mouse games build towards a showdown at a high stakes poker game in Montenegro where Bond is accompanied by Treasury representative Vesper Lynd (Eva Green), the new Bond girl. The initial exchanges between them are played out in some sharp, well-scripted bantering and the relationship develops convincingly towards a tenderness that is unusual in the Bond movies.

Much like last year’s Batman Begins, returning to the origins of Bond seems to have reinvigorated every aspect of the production. Regular screenwriters Neal Purvis and Robert Wade have clearly benefited from working with fresh material and the addition of Oscar-winning screenwriter Paul Haggis to the team has no doubt added a sharper edge to the dialogue and provided the film with a tougher ethos.

Some of the action sequences are brilliantly choreographed, especially one involving a chase scene between Bond and Sebastien Foucan (the founder of Free Running in France) in a shipping yard where they both fight on and leap from a crane.

Despite holding reservations of my own throughout the first half an hour or so of the film as to whether Craig was good looking and smooth enough to pull off the role of British cinema’s greatest icon, those doubts were soon put to rest as he became more assured as the film progressed, easily carrying the weight of expectation on his broad shoulders. It also helped that he can actually act, something lacking in previous Bonds, excluding Connery.

In his first Bond venture since Pierce Brosnan’s debut in Goldeneye (1995), director Martin Campbell has achieved the considerable feat of reinventing the franchise for a second time and creating a film that has managed to outdo its upstart rivals like Jason Bourne and Ethan Hunt.