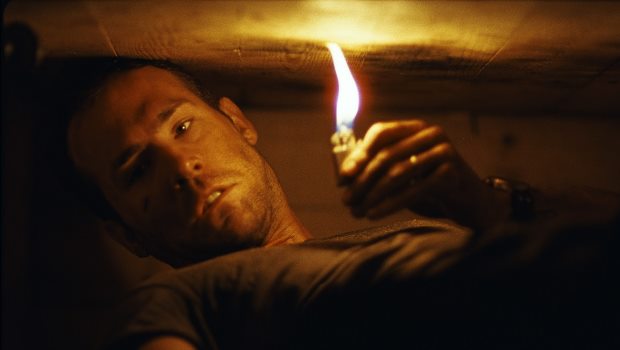 Summary: One of the film’s great strengths is that Sparling’s script doesn’t pull any punches with the scenario; there are no last-minute twists or reveals, Conroy really is buried in a box in the middle of the desert.

In which Ryan ‘The Proposal’ Reynolds wakes up to find himself buried alive in a coffin, and we the audience are in there with him. For each and every one of the film’s 94 minutes. After some great Saul Bass-inspired opening credits, debut director Rodrigo Cortés starts as he means to go on, with the screen remaining uncomfortably black for what feels like forever until the flicker of a zippo lighter introduces us to Paul Conroy (Reynolds), bound and gagged and, understandably, a little shaken up on finding himself buried in a box. Quickly discovering that his captors have left him an Arabic-language mobile phone, Conroy starts making some panicked calls to try and figure out who put him there, and how the hell he’s going to get out.

To call this film audacious would be putting it lightly. Cortés and writer Chris Sparling push the concept of one single claustrophobic location to its absolute limit, but this isn’t an attempt at documentary-style reality. Incredibly creative camerawork from cinematographer Eduard Grau (also responsible for photographing last year’s A Single Man) continually breaks the ‘real’ boundaries of the coffin, while intense editing and some huge dramatic music cues keep the tension building as we hang on to discover Conroy’s ultimate fate.

One of the film’s great strengths is that Sparling’s script doesn’t pull any punches with the scenario; there are no last-minute twists or reveals, Conroy really is buried in a box in the middle of the desert. And while Sparling has points to make about the loss of the value of the individual in our corporation/nation-prioritising world, director Cortes ensures that the message comes across in a way that’s hard-hitting but not heavy-handed; the themes are always subordinate to the telling of this specific story.

It all hinges on Reynolds, and the actor better known for his rom-com roles totally delivers what’s needed, his committed performance ensuring that the believability of his predicament remains constant. Buried represents a further sign that Reynolds is interested in more than just playing it safe with his choices – his turn in 2007’s The Nines was an equally interesting diversion from the mainstream. A few more like this and a few less He’s Just Not That Into You’s wouldn’t hurt his standing one bit. Maybe Tarantino could give him a call?