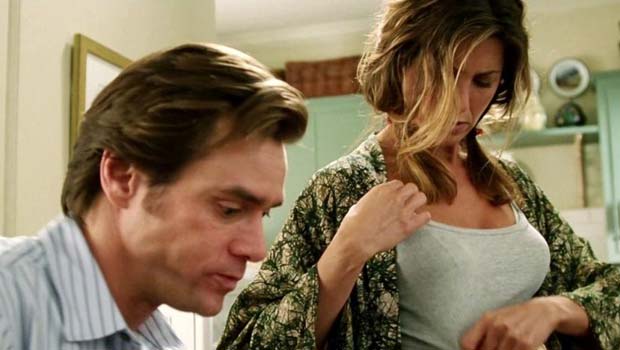 Summary: A stock ending predictably shows Bruce’s growth as a person, but the film never gets past amusement at its own conceit.

It’s a safe assumption that Bruce Almighty was an easy pitch to studio bosses. Morgan Freeman as God. Jennifer Aniston – so good as the befuddled girlfriend in the Good Girl as romantic interest. And Jim Carrey granted divine licence to burn rubber. Pennies from heaven, right?

Well, yes, box-office figures in the US suggest so. This is, after all, Carrey back doing the hi-energy clowning he does best. Yet his character, Bruce Nolan, remains recognisably human in his faults, with little of the Ace Ventura-style excess that would seem strangely regressive after straight(er) turns in The Truman Show and Man on the Moon.

A small-time television reporter living in Buffalo, New York with his girlfriend Grace (Aniston), Bruce is frustrated by a stalled career. Following the worst day of his life, when he is passed over for promotion and melts down live on camera, gets fired and alienates Grace, he begins an incessant bitch towards the heavens.

Waking next morning to his life’s wreckage, he receives a cryptic message by pager and follows its instructions to a deserted building. Deserted, except for God. Bruce takes some persuasion, but an almost believable Freeman eventually succeeds in convincing him of His divinity, before transferring his powers to Bruce to teach him to cherish what he has. Or to be careful what he prays for. Or that there’s no power without responsibility. Or that love is all. God, one suspects, only knows – director Tom Shadyac and his underdeveloped script certainly don’t. After some fun messing around with the world and a female colleague, making monkeys climb out of arses and reporting exclusives from ‘random’ asteroid impacts however, Bruce realises that not even omnipotent potency makes up for losing the love of a good woman.

As another slick showreel for Carrey’s talents, this is a slight but generally satisfying page in his career. Morgan and Aniston are perfectly cast, and there’s a glorious scene in which Bruce’s news nemesis, played by Steve Carrell, out-Carreys Carrey himself. But as a comic exploration of faith, power, weakness, love and free will – all of which the film and Freeman make reference to – it’s a near biblical disaster. Bruce’s actions create tidal waves and riots, but these either sort themselves out or are conveniently forgotten. And you have an African-American deity for what, the first time ever in a film? An interesting development worthy of a few questions you might think, but Bruce doesn’t even bat an eyelid. A stock ending predictably shows Bruce’s growth as a person, but the film never gets past amusement at its own conceit. Ultimately then, Bruce Almighty wants to have its manna and eat it, casually tossing aside the wrapper.