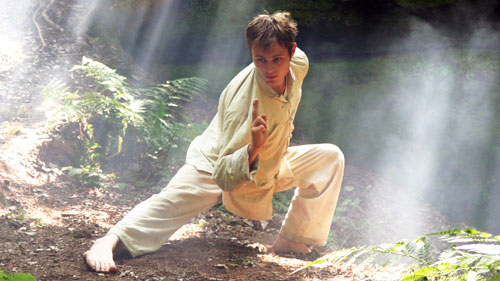 Summary: Despite the budgetary restraints, this is a well shot and edited movie that makes the most of its Brighton locations.

Perhaps surprisingly, this low-budget British effort has much in common with DreamWorks’ Kung Fu Panda: both are madcap martial arts spoofs in which a ‘chosen one’, under the tutelage of a great master, must save the world by defeating an unstoppable villain trained by the very same master. Of course, Kung Fu Panda featured rather less joint-puffing…

The slim plot of Brighton Wok (geddit?) is that the evil balaclava-wearing Vafan Cuolo takes over Brighton’s iconic Pavilion and, with the help of his vast kung-fu army, unleashes a reign of terror in the city. Young Ryu (presumably named after the Streetfighter 2 character) is the city’s only hope and, after being given some Karate Kid-style training by the fake-bearded mystic The Ganja Master, he sets out to thwart Vafan. To succeed, Ryu needs to harness the true power of ganja, which not only helps him to open his mind but also grants him the ability to move through space.

The story allows plenty of opportunities for sending up martial arts clichés on the incongruous streets of Brighton, and, in true genre fashion, there’s a dramatic backstory (told via flashbacks), a wildly over-the-top villain and an aphorism-spouting old Master.

However, though a martial arts movie doesn’t necessarily need the budget of House of Flying Daggers, it can be a difficult genre to pull off if a director doesn’t instinctively know how to shoot crunching, immediate fight scenes. Even in a low budget spoof, it’s important to include plenty of thumping, amusingly over-the-top fight scenes; it’s martial arts fans who’ll get the most out of a martial arts spoof after all. The final showdown between Ryu and Vafan suggests that director Gabriel Howard does have some potential at shooting action scenes – it’s a well edited, competently-staged slice of comedy fighting, if not especially inventive. But the rest of the movie is sadly lacking in big kung fu battles – there’s a quick showdown in a gym and a couple of other brief scenes of OTT slaughter (with added CG blood), but that’s about it. You wish that the makers had perhaps spent a little more time studying Jackie Chan classics (Project A is still one of the most perfect combinations of martial arts and comedy ever put on screen) and attempted a few cut-price imitations of their own.

Still, this is very much a broad comedy rather than an action movie. In this respect it’s only sporadically amusing, with few decent gags or memorable lines, and the thin scattering of laughs mainly come from the gloriously over-the-top performances of some of the supporting players (which are obviously inspired by the likes of Monty Python and The League of Gentleman) – Randolph Barrington’s Ganja Master and Rue Barratt’s tree-dwelling Crazy Old Man are particular standouts.

Despite the budgetary restraints, this is a well shot and edited movie that makes the most of its Brighton locations, from the clever opening scene which introduces a selection of characters as Ryu walks around the city, to a great-looking scene in which Vafan Cuolo instructs his followers from the top of the Pavilion. Thanks to the sense of ‘community filmmaking’ that exists in Brighton (with many individuals and companies apparently helping the production for free), the makers of Brighton Wok have been able to craft an ambitious and resourceful tale that often looks more expensive than it is. It’s far from a British comedy classic, but the knockabout energy and relative slickness of the production does hint at bigger and better things for director Gabriel Howard and his cast.