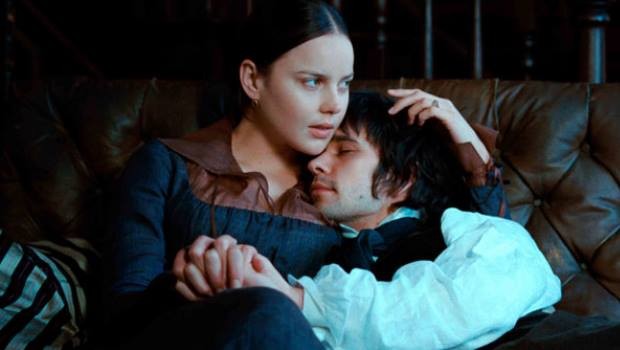 Summary: Bright Star’s power comes from the mood that their combined work so successfully evokes.

This period drama from Jane Campion, director of The Piano and The Portrait of a Lady, dramatises the short, chaste and intense romance between the poet John Keats (Ben Whishaw) and his neighbour, the seamstress Fanny Brawne (Abbie Cornish), in the three years leading up to his death from tuberculosis aged only 25. While Campion’s previous films have had a cold precision about them (not necessarily a bad thing), Bright Star is the complete opposite: warm, achingly romantic and sometimes breathtaking in its visual beauty. It is undoubtedly one of the best films of the year.

The central relationship is set up with a feisty meeting between Fanny and an equally self-confident Keats, in which she gives an outspoken critique of one of his poems. After this confrontational meeting there is a clear attraction between them, but Campion concentrates on getting beneath the characters’ surfaces, spending a lot of time on quieter moments between them, capturing looks and touches that speak much louder than their words.

The love between Fanny and Keats is under attack from the moment it begins, most forcefully from Keats’s fellow poet Brown (Paul Schneider), who seems to harbour a jealous love of his own, fearing that Fanny will destroy his and Keats’s pure creative partnership. Both Whishaw and Schneider play the idealistic Romantics without a hint of irony, sternly telling their neighbours not to disturb them, even if they seem not to be working, because “thinking is our working; we are opening ourselves up to inspiration”. There is great pleasure to be had in watching these ‘men from another time’ so fervently pursuing what they see as their duty to the world.

Campion, as both writer and director, presents the affair itself as a Romantic poem brought to life, moving from one extreme of emotion to the next. From Fanny’s absolute contentment as she sits in a field reading a letter from Keats, to her inconsolable weeping as she hears of his death, each moment is captured and created with affecting immediacy. Credit must also go to the film’s director of photography Greig Fraser and composer Mark Bradshaw, as so much of Bright Star’s power comes from the mood that their combined work so successfully evokes.

All of Campion’s efforts would have been fruitless though, had she lacked a lead actress capable of being the ‘Bright Star’ that Keats wrote so fondly of. But Abbie Cornish really does shine under the camera’s lingering gaze, conveying Fanny’s clear-eyed love, longing and passion. Her performance is the highlight of this true cinematic pleasure.