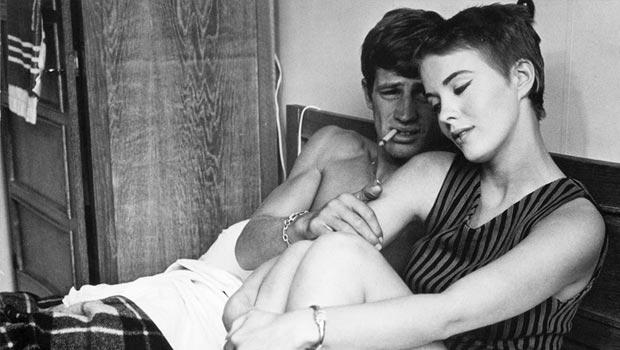 Summary: There is timeless truth to be found in those interactions, and that’s why Breathless continues to endure.

It’s re-released this week in a shiny new blu-ray edition as part of Optimum’s Studio Canal Collection (along with Mulholland Drive, The Third Man, Delicatessen, Le Cercle Rouge and more), so I took that as a good enough reason to finally check Jean Luc-Godard’s game-changing 1960 debut Breathless (À bout de soufflé) off of my ‘influential movies I must get round to watching’ list.

Breathless is all about style. In his plot-light pursuit of two free spirits in the hip streets of Paris, Godard pioneered the use of jump-cuts, not only from one scene to the next but throughout the entire film, in the middle of conversations, instantly creating a new approach to film editing. And the film is not just formally stylish; the two main characters, Michel and Patricia, played by Jean-Paul Belmondo and Jean Seberg, became instant icons of cinematic cool, thanks to their chain-smoking, shades-wearing air of complete self-confidence.

Added to this, Michel is an entirely unsympathetic central character (his opening line is, “after all, I’m an arse-hole”, and he’s absolutely right), but somehow, I think mainly by showing us Patricia’s fondness for him, Godard makes us care about him by the time the film reaches its poignant conclusion. In so doing he creates that staple of contemporary cinema, the anti-hero.

All of this is already enough to make the film essential viewing for anyone interested in how movies became what they are today, but it should also be noted that Breathless is a lot of fun. There’s not a great deal going on under the surface, but there’s a vital energy and creativity to Godard’s filmmaking.

For me though, the thing that makes Breathless more than an important historical artefact is Jean Seberg, whose disarming performance provides the film with a necessary emotional centre. At times, Michel’s insensitive, sexist and self-centred comments are frankly repulsive, but the way in which Seberg plays Patricia’s responses – always seeing through the big talk to the man beneath – is natural and affecting, perfectly conveying the mysterious and often contradictory workings of human relationships. There is timeless truth to be found in those interactions, and that’s why Breathless continues to endure.