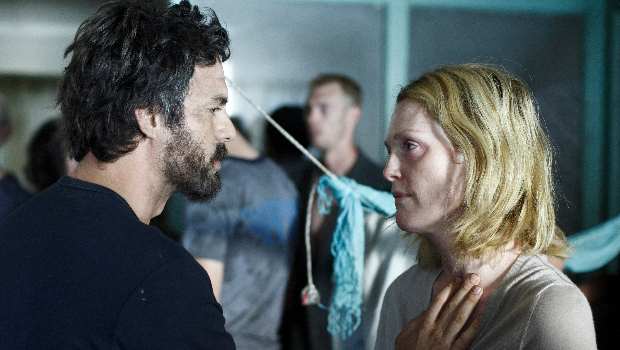 What would happen if an inexplicable plague of blindness hit the world? How would humanity cope and what shape would the new world of the blind take? It’s an interesting premise, and one that City of God and The Constant Gardener director Fernando Meirelles grippingly engages with for the first 45 minutes of his new film. Then things start to go wrong. Meirelles lets the story take some pretty illogical turns so that he can put his main characters through horrific experiences, until it ultimately becomes clear that the film is not really about these particular characters, but is focused on the larger truths about humanity that they are meant to represent. The real truth is that by the film’s end, most audiences will either be too repulsed or too bored to engage with any of its debatable profundities.

Beginning with a scene showing, we assume, the first instance of this blindness striking, Meirelles follows the unnamed victim as another nameless character helps the newly blind man home and then promptly steals his car. The message is clear: given the opportunity we humans will do bad things to each other. This is the point that the film is making, and if we don’t get it from the opening scene, Meirelles is going to make absolutely sure we’ve got it by the time the two-hour ordeal is done.

As the blindness spreads, those affected are quarantined and left with little to no support except for regular food drop-offs. Meirelles concentrates on one of the quarantine zones, an abandoned hospital, in which, amongst many others, Mark Ruffalo, Julianne Moore, Gael Garcia Bernal and Danny Glover attempt to survive as civilized society disintegrates around them.

Several things about Blindness invite immediate comparison to Alfonso Cuarón’s 2006 film Children of Men; the inexplicable illness motif, the beautifully composed, washed-out cinematography and the fact that both films star Julianne Moore, but it’s a comparison that highlights Blindness’ flaws. Cuarón kept the journey of his central character in sharp focus above all the points his film was making about the decline of society, but Meirelles makes the issues of his film more important than the characters in it. This makes it difficult to stay interested in his story, especially when Meirelles pushes the film into really unpleasant territory.

Equally off-putting is the unnecessary narration from Danny Glover, which begins halfway through the film. It’s bad enough that Glover’s character is shoehorned into the film in order to explain what’s been happening in the outside world, but to have his character narrating too – just in case we don’t get the film’s message – is ridiculous.

In the midst of all these problems, Blindness holds some compelling ideas and very good performances, with Bernal particularly good as a morally bankrupt opportunist. Ruffalo also works well as the everyman character, giving a performance that is more believable than the rest of the film. These are a few bright spots in an otherwise murky piece of cinema that offers no good reasons for dwelling in such darkness.