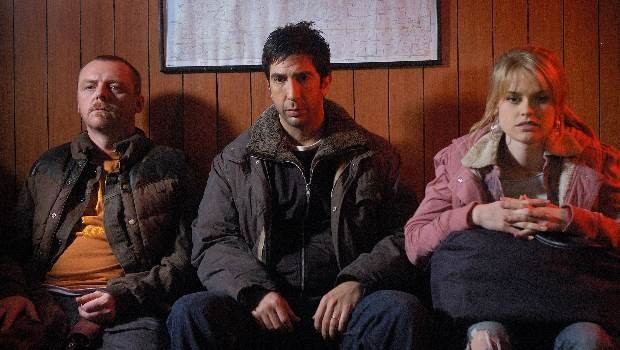 Summary: It looks great and the script is tight as a drum. A very enjoyable night out.

Charlie Wood (Schwimmer) might be described by some as a loser. An unemployed former teacher and struggling writer, he is supported by his police officer wife Penelope (McElhone), but is tired of his daughter Emily having to wear second hand clothes. So he takes a job in a call centre, where he meets Gus (Pegg), an unconventional employee whose example gets Charlie fired on his first day. However, Gus assures him, none of this matters as he has a sure-fire way to get rich quick – he knows the name and address of a priest who turned up in the company database of visitors to illegal porn sites.

Gus and Charlie team up with Josie (Eve), Gus’s sometime girlfriend, and the trio set off to pick up the cash. Except, naturally, its not that simple. Gus isn’t half as clever as he thinks he is; their flimsy alibi, dependent on Charlie’s feeble acting skills, is blown; Charlie is hardly a natural criminal. And, most worryingly of all, the famous CIA operative, Special Agent Hymes (Polito) is in town to investigate a series of murders.

Rah, I think, as I settle down in my seat. 86 minutes. Even bigger rah, Simon Pegg. Small downer, David Schwimmer, the most annoying Friend, whose attempts at a film career seemed to stall after The Pallbearer, an unfunny comedy co-starring Gwyneth Paltrow, an actress whose level of acclaim perplexes me. Well, Schwimmer aquits himself respectably in the everyman role; Charlie is very intelligent, with an annoying habit of reciting arcane facts; he’s also lacking in confidence, feeling that he is failing as a husband and a father, and he latches onto Gus like a drowning man. Gus proves to be less of a lifesaver than Charlie might have hoped, and Pegg is very funny as the conman who bites off more than he can chew.

They are ably supported by Alice Eve, Mimi Rogers and Natascha McElhone. British actress Eve in particular is hilarious as the sweet faced but callous barmaid and teenage beauty queen with a secret of her own. Mimi Rogers has a bizarre and very short cameo – I won’t give away how she meets her end, suffice it to say its sick and brilliant. Everyone is scamming everyone, and the plot clips along at a giddy pace with enough twists to keep you guessing. There are amusing allusions to other films, including The Matrix. Bizarrely, most of the film’s exteriors were shot on location in the Isle of Man and Wales, doubling for the Oregon coast.

The film has an almost cartoony energy, a hyperreality, which is great fun; it has a similar blackly comic outlook as Fargo, and does a great line in rug pulls, where you just think you know who the good guys are and then realise that they are actually psychos. With an array of talent behind the camera, including Oscar-nominated DOP Richard Greatrex (Shakespeare in Love, Mrs Brown), it looks great and the script is tight as a drum. A very enjoyable night out.