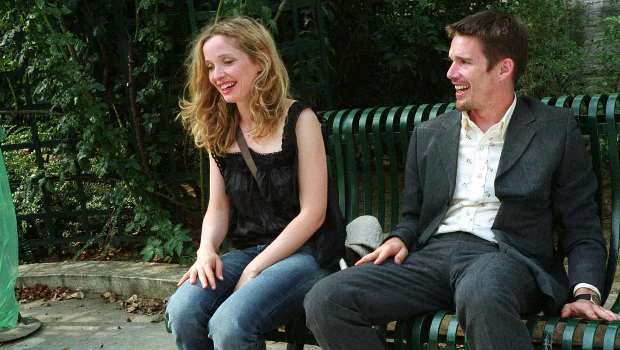 Summary: Shot in real time, the movie just feels like a slice of life.

9 years ago, two students, Celine (Julie Delpy) and Jesse (Ethan Hawke) met on a train to Vienna. After enjoying a spirited debate, Jesse persuaded Celine to get off the train and see the city with him, and they spent a single magical night together before parting. With the optimism of youth, they arranged to meet under the Big Wheel in Vienna in six months time, and, so as not to spoil the magic, didn’t exchange any contact details. Richard Linklater’s little film was a delight, spending two hours in the company of two very real people, and leaving the audience wondering, did they get together? Could the magic last?

Jesse is now married, a father, and a successful writer on a European book tour. His bestselling novel is based on the night he spent with Celine, and it’s clear from the beginning of the film that that night has been the most profound experience of his life. Celine comes in to hear his talk, and when its finished, the two of them go for coffee, and catch up, and walk through Paris, all the time aware that the clock is ticking and that Jesse has a
plane to catch.

This is simply a wonderful piece of film-making. If you liked the first film, its like spending two hours catching up with very old friends. Where have they been? What have they been doing? Do they still fancy each other? Now in their early thirties, Jesse and Celine are older, more brittle, less trusting, more cynical; both have been marked forever by one night in Vienna. Celine avoids intimacy, preferring long-distance relationships, while Jesse describes his marriage as running a small nursery with someone I used to date’. Their regret at not meeting again is palpable, but was it fate keeping them apart or just bad timing?

Wonderfully, just as in the first movie, the characters talk seemingly randomly about whatever comes into their heads, so as well as the serious, and sometimes downright depressing moments, there’s also a lot to make you laugh. Celine worries that she’s become neurotic; when Jesse says she’s thinner now, she responds immediately: Did you think I was fat? You wrote a book about a fat French girl?’; but they also cover religion, the environment, and American gun crime. Its also incredibly sexy; all light, delicate touches and shy sideways glances and slightly awkward flirting.

Shot in real time, the movie just feels like a slice of life. Linklater collaborated with Delpy and Hawke on the script, which feels so rich and natural that it is hard to believe these are actors; they inhabit their roles so fully. Once again, the film is open-ended ­ the audience I was with groaned when it ended. You can only hope that Linklater and his leads will be moved to revisit Jesse and Celine every ten years or so ­ I can¹t wait to
see them again.