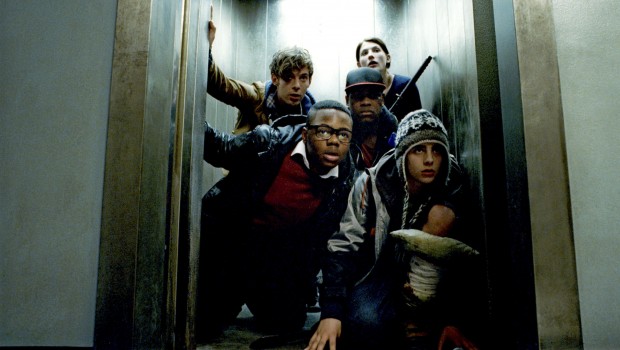 Summary: This energetic mix of Kidulthood and Critters is insanely entertaining.

Fans of The Adam and Joe Show will know that Joe Cornish has always harboured aspirations of becoming a fully-fledged megaphone-wielder. The toy-packed parodies he created with Adam Buxton were, in their own way, mini masterpieces, and anyone who bought The Adam and Joe DVD might have seen clips from Cornish’s stylish student horror film tucked away among the extras. Now, finally, Cornish has been given the chance to direct a feature, and the good news is it’s the best genre film of 2011 so far.

Attack the Block is already being touted as the next Shaun of the Dead, and it’s not hard to see why, what with Nick Frost starring in both and Edgar Wright on producing duties here. Both films also walk the line between comedy and serious horror: as with Shaun, those expecting an all-out gag-fest might be disappointed. But the comparisons shouldn’t mask the fact that Cornish has a filmmaking style all his own, mounting exciting action set-pieces and quieter, character-building moments with equal self-assurance while his camera sweeps up, down and through the corridors of the South London housing block of the title.

The story is a mish-mash of Cornish’s favourite movies from the late 70s and 80s – Assault on Precinct 13, Critters, The Warriors, Streets of Fire – which he refashions into something that feels surprisingly fresh and original. That’s partly because, for all its American reference points, this is a film set in a recognisable contemporary Britain. After all, Attack the Block’s heroes aren’t an all-American family or a squadron of marines but a teenage gang of Lambeth hoodies, led by stony-faced Moses (Boyega). The gang begin their night by mugging a woman for her wallet and phone, but are soon caught up in far greater trouble with the arrival of ravenous extraterrestrials – agile, virtually featureless beasts with a penchant for snacking on humans. The friends are forced to team up with their mugging victim Sam (Whittaker) and dope-heads Ron (Frost) and Brewis (Treadaway) to defend the block from a seemingly undefeatable enemy.

Moses and his gang are believable and eventually sympathetic protagonists, and Cornish cleverly plays on preconceptions created by tabloid headlines. They might put on a fearsome front, but in quieter moments the gang members reveal a more sensitive side, and admit this is a life they’ve been forced to choose, while Moses himself grows into a well-rounded Snake Plissken-style action hero who discovers the real meaning of honour. Like any gang, the teens have their own set of rules and code of honour, witnessed in a strangely touching moment when Moses tells Sam they’d never have jumped her if they knew she lived in the block. One of the worries about the movie was that the gang’s rapid-fire, slang-filled urban patois would feel false and cringeworthy. Yet Cornish’s extensive research and workshopping has paid off: the boys’ banter feels natural, authentic and, once you adjust to it, strangely hypnotic (though teens will perhaps be a better judge as to how genuine it actually is).

Attack the Block also scores points for its awesome evil aliens, who are quite unlike the tentacled monstrosities we’re used to. Fast, ferocious and black as oblivion, the creatures feel more tangible for being (mostly) created through traditional man-in-a-costume effects (CGI was apparently only used to take detail away). It’s a smart move, especially when you compare these aliens with the lame computer-generated star of this year’s other Nick Frost genre comedy, Paul.

As the action hurtles around the block, taking in other faces such as vicious coke-peddler Hi-Hatz and pint-sized wannabe gang members “Beats” and “Mayhem”, the pacing is timed to perfection, with Cornish stopping the action just long enough for us to pause for breath and learn something new about the characters, before plunging us into another chase or battle. There are some big laughs, from middle class stoner Brewis’s desperate attempts to appear hip to the way the kids never have any phone credit – but Cornish wisely never treats the characters or situations with flippancy: when certain individuals don’t make it through to the credits, you really feel for them.

Attack the Block isn’t a film of great complexity or depth perhaps, but who wants complexity and depth in an alien invasion picture? This energetic mix of Kidulthood and Critters is insanely entertaining; we can’t wait to see what Cornish will direct next.