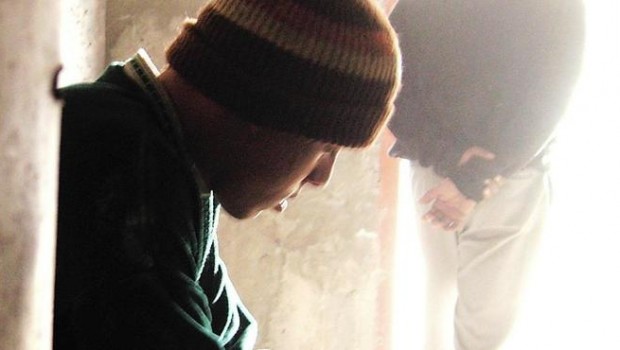 Summary: Atash is a memorable, striking experience and one which hails Abu Wael as an important new talent.

Deep within an isolated dustblown valley a Palestinian family are slowly wasting their lives away. The taciturn head of their farmhouse, Abu Shukri, rules with an iron fist, refusing to let his family break free from the constraints of traditional life. Everywhere in the household conflict and resentment simmer away. This is most apparent between Abu Shukri and his teenage son, a boy who might hold the potential to escape from their miserable existence if it wasn’t for his father’s insistence that there’s little point finishing school (“he knows enough already,” as he scoffs to the family).

Abu Shukri also has a difficult relationship with his oldest daughter Gamila. Gamila has emerged from an unspecified sexual assault in the family’s hometown, the very act that triggered their self-imposed exile. The family just about eke out an existence illegally logging trees to make charcoal until Abu Shukri hits upon an ambitious idea to divert water directly to their home – a scheme that begins to illicit a yearning for freedom in the rest of the family.

Fuelled by a sense of foreboding and misery, Atash (‘Thirst’) is in many ways a difficult movie to sit through. Slow and depressing, this is a film which by necessity is bereft from any kind of warmth – the ‘thirst’ of the title refers not just to the bone-dry landscape but also suggests a thirst for love and understanding. Suffice to say it’s a thirst that the film refuses to quench. The plot is driven by empty vistas and vast silences as the film meanders towards its tragic finale; you’ll be hard-pushed to find much in the way of optimism here.

This is essentially a downbeat ‘mood’ picture, and it’s here that Palestinian director Abu Wael excels. He pieces together an effective, slow-burning atmosphere that is awash with billowing smoke and dust, and the film is scored to a vaguely threatening harmonica soundtrack that brings to mind Once Upon a Time in the West.

Abu Wael also coaxes some utterly convincing performances from his non-professional cast. Mahajne is particularly impressive as the stubborn patriarch at the centre of the movie. His impassive, weather-beaten features and sparse, simple dialogue instantly suggest Abu Shukri’s total resistance to emotional weakness – something that makes the occasional slip of feeling (weeping in the shower, carrying his daughter in his arms through the dustblown landscape) all the more affecting.

In term of plot Atash is a simple movie, and Abu Wael has spoken about his dislike for symbolism. But the relationship between the family members is a complex one, and this provides the narrative thrust that takes the picture in interesting directions. It might be one of those films that’s easier to appreciate than actually enjoy, but there’s little denying that Atash is a memorable, striking experience and one which hails Abu Wael as an important new talent.

‘Diary of a Male Whore’ is an odd but intriguing short film from Abu Wael that juxtaposes a man prostituting himself in Tel Aviv with childhood flashbacks to the Israeli invasion of his village. There’s also an interesting question and answer session with the director and the usual trailer and stills.