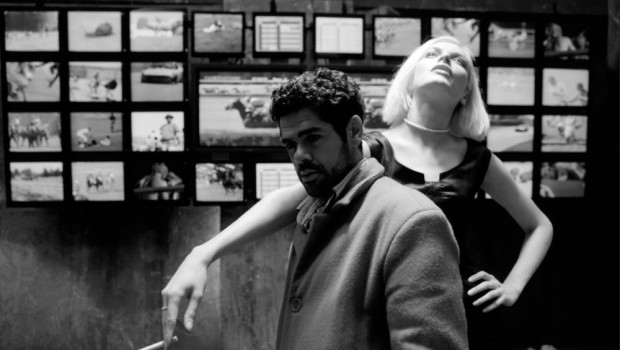 Summary: My notes say ‘this is a silly film’ and ‘Andre is an ungrateful knob’.

The production notes for Angel-A give the synopsis as:

A man meets a woman in Paris…

… thankfully as I lack Gallic pretension, I can fill you in. Rubbishy small-time crook Andre (Debbouze), on his uppers, decides to chuck himself into the Seine. Good riddance, I say! But the director – I mean God – obviously disagrees, because he sends gorgeous blond giantess Angela (Rasmussen) to save him and show him how his life is, after all, worth living.

Luc Besson was always about style over substance but I have a guilty love of The Big Blue, despite the fact that it’s deeply silly, as well as Nikita and Leon, and though The Fifth Element descended into noise and deep daftness, it looked great and gave sci-fi a more colourful alternative template to Blade Runner style grunge and endless rain. As noted in the District 13 review, he’s been frittering away his talents writing and producing since the critical and financial car crash that was The Messenger, and has now made a rather George Lucas-like return to directing with Angel-A.

I will admit the film looks good, great even. Paris is a character in the film, shot in moody black and white, lots of it in natural light. And I suppose we should give Besson credit that he has tried to step outside the parameters that define a Luc Besson movie. But the fact that the story idea is more than ten years old… Besson’s films often feature uncannily gorgeous women sent from heaven to undeserving men, who see themselves as outsiders, so once you strip away the stunts and the car chases he has in fact remade The Fifth Element, an adolescent fantasy if ever there was one.

Anyway. Angela trails round Paris after the moaning Andre, listening to him whine, cheering him up, prostituting herself (or is she?) with 30 men in the toilets of a nightclub and handing the cash over to him, beating up people who threaten him. All the while, he moans. And moans. And moans. To the point where the whole thing starts to feel like you’ve strayed into a counselling session. But she is an angel (it’s all in the name…) and has infinite patience. Shame really – what he needs is a good hard clip round the ear.

You can’t blame the actors, who aren’t actually that bad. It’s the lack of anything resembling a decent script or interesting story. The best thing I can say about it is that at 90 minutes it’s short and yet, perversely, still manages to outstay its welcome.

My notes say ‘this is a silly film’ and ‘Andre is an ungrateful knob’.

I wonder if Besson thought it would be fun to make a much duller version of It’s A Wonderful Life? Skip this and watch that instead.