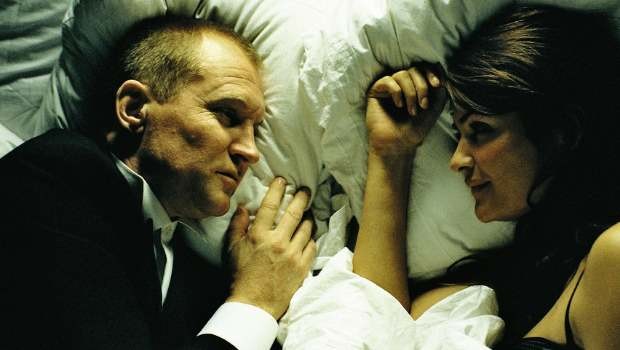 Summary: Beautiful to look at yet hard to swallow, Allegro is a far cry from Boe's tight debut, Reconstruction.

Charlie Kaufman’s mind-bending romance movie, Eternal Sunshine of the Spotless Mind, was not what everyone expected it to be. At once, love story and pyscholanalytical study of identity and memory loss, Eternal Sunshine was an exhilarating creative experience with a reckless indifference towards conventional narrative structure.

Less effectively, though with an equal dose of stylistic and thematic creativity, Christoffer Boe’s sophomore effort is not what it seems to be. Part sci-romance mystery, part self-reflective metaphysical psychoanalysis, the movie is nonetheless more forthright than its premise makes it out to be.

At the centre of Allegro is Zetterstorm, an accomplished pianist whose perfectionist demeanour hides worlds of anguish and emotional repression. The demise of his relationship with Andrea (played by model Helena Christensen in her acting debut), takes him on a personal investigation through his own past, trapped in the “Zone”, a timeless, transitional state of being where Zetterstorm’s identity and past memories are hidden. With this premise, Allegro traces the confusing threads of regret, doubt, and dissonance that creep into any romance, and though touching at times, any real substance is trapped beneath layers of cinematic over-stylisation.

Weighed down by its own flaws, Allegro doesn’t sustain its ambitions with a coherent script or affecting performances. While Boe draws solid performances from all of his cast, the otherwise thoughtful turns from his two romantic leads fall short of any real spark. In her acting debut, Christensen trawls through her scenes with a disinterested, expressionless tone that works only insofar as the naivety and figurative significance of her role is concerned. In playing the mysterious femme fatale, her minimal acting does the job, though leaves us with more questions than we are prepared to answer.

Shot with a low-key, grainy visual approach, Allegro has a decidedly arthouse appeal. Though tinted with striking cinematography and a stylisation reminescent of a cross between the Quay brothers and a Kieslowski movie, Allegro fails where it shouldn’t. Little is provided to support the illusive strength of Zetterstorm and Andrea’s connection, and it’s unfortunate. We are given little insight into any of the characters, and while the seducive cinematography and captivating musical overtures are frequently sublime, it’s the dry aftertaste that ultimately reveals the film’s shortcomings.

Boe’s direction tries to accomodate the offhand script, and is full of tricksy, if occasionally effective, camera tricks. In trying to appeal, Boe juices up the wrong end of the stick. Beautiful to look at yet hard to swallow, Allegro is a far cry from Boe’s tight debut, Reconstruction.

Ultimately a movie about fundamental human failings, Allegro is, however, far from a failure. And if his first two features are anything to go by, Boe ‘s name is one to remember.