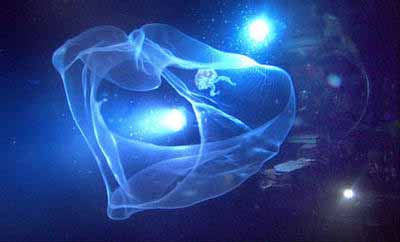 Aliens of the Deep Review

You get the sneaking suspicion that James Cameron may have been some kind of guppy in a previous life. From Piranha 2 to Titanic the man has always displayed an affection for all things aquatic, and now that he’s gone and bought himself a submersible he seems content to avoid actual feature films and instead embark on a series of daring deep-sea dives, filming the results.

One such dive – to the bottom of the Titanic wreck – was the subject of 2002’s documentary Ghosts of the Abyss. Cameron now follows it up with Aliens of the Deep, a new IMAX feature that weakly puns on the title of another of his best-loved films (presumably 2006 could herald the release of the epic Swimming With Terminators).

The focus this time around is on the extreme environments of the deep ocean floor and the weird and wonderful denizens that flourish there. As the submersibles plunge down, they uncover creepy worm things (probably not the technical name for the species) and blind crabs living in the midst of hydrothermal vents where it was previously thought life couldn’t exist. With space researchers on board as well as marine biologists, the theory is that exploring the uncharted depths of the ocean will provide vital clues into launching eventual explorations to the seas of other worlds (particularly Jupiter’s moon Europa).

There’s plenty to be critical of in Aliens of the Deep. In narrative terms it barely holds together, with little in the way of coherent theories, life-shattering discoveries or real insights into the ecosystems of the ocean floors. The cloying gee-whizz voice-overs don’t help; you desperately cry out for the considerate camerawork and thoughtful David Attenborough narration of the best BBC documentaries. And, while it does admittedly leave you with a guilty smile on your face, the computer-generated imagining of diving on an alien world shows that Cameron hasn’t entirely learnt from the derision that greeted the (originally released) ending of the of The Abyss.

But all criticisms are, as usual, forgotten with the sheer joyous spectacle of 3D IMAX. For an IMAX feature is more than just a movie – it’s an experience. From the huge screens to the stupid over-sized glasses it’s almost impossible to walk away without being thoroughly entertained by the whole affair. Cameron, of course, loves technology almost as much as he loves the ocean, and the movie looks and sounds just as spectacular as you’d expect it to.

Yes, as often with these IMAX films, it’s a pity that a little more thought hadn’t gone into the movie aside from the visuals. But with a slew of mind-boggling sea creatures bursting out of the cinema screen before your very eyes, it’s unlikely anyone’s going to be too concerned about a little thing like that.