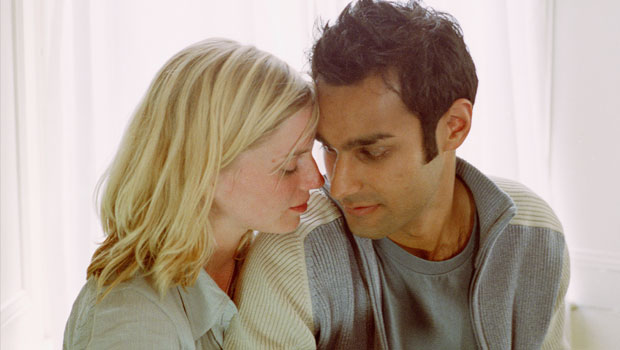 Summary: Ae Fond Kiss may not break any new ground for Loach as a filmmaker, but it's a quietly lovely piece and a refreshing antidote to cynical British romances like Love Actually, as well as being his most commercial work to date.

Ken Loach directs film with happy ending shock! Has the last hope and bastion of the left in British cinema sold out? Fear not. For though Ken’s new film is set in a comfortably middle class Glasgow free from junkies and gangsters, he and screenwiter Paul Laverty are not scared to ask some hard questions about religion, race and immigration in post-911, post-Iraq War, ‘multi-cultural’ Britain. Casim (Atta Yaqub) is the beloved only son of first-generation Pakistani immigrants. Devout Muslims, Casim’s parents have worked hard and struggled against prejudice to establish a home in Glasgow and to educate and provide for their three children. Casim is the apple of their eye and they are happily building an extension to the family home for Casim and his bride-to-be, his cousin Jasmine. Casim is not particularly thrilled about the arrangements, but seems resigned to his fate, until he meets Roisin Hanlon (Eva Birthistle), a music teacher at his sister Tahara’s school. Roisin is sparky, smart, beautiful and independent. And white. And a Catholic.

Knowing that his marriage is weeks away, Casim nonetheless asks Roisin out. She accepts, and before long they are seeing each other regularly and falling in love. Its not long before friends and family find out and the resulting scandal threatens to destroy both their worlds.

There’s nothing particularly new about the plot of Ae Fond Kiss. Its boy meets girl, boy falls for girl, boy and girl deal with adversity and the forces that are working to keep them apart. Can true love prevail? But Loach and Laverty give this a fresh new spin and lift it above the stuff of melodrama by raising issues about race and culture.

For example, we might assume, as both Roisin and Casim do at first, that Roisin has nothing to lose by being in a relationship with a Muslim. But as a Catholic teacher at a Catholic school, Roisin is subject to sanction by her priest, who is not prepared to countenance her living in sin. Roisin realises that her private life is not as private as she might think, and that her relationship with Casim could ruin her career. At the same time Casim has to deal with the shame and heartbreak that he has bought on his family. His older sister, Roxana, is especially unhappy with his choices: her own wedding is put on hold when Casim moves in with Roisin. Prejudice is equally bad in both communities, with Roisin and Casim caught in the middle.

Despite the serious subject matter, the film has a lightness not normally associated with Loach and Laverty. The streets here are tree-lined and the people live comfortable lives, go on holiday, have hopes and dreams. A section of the film is set in Spain, where Roisin and Casim go for a short break. Even the Glasgow scenes are set in summer. The film is also surprisingly sexy, with the good looking leads getting down and dirty on a regular basis. One scene plays with the classic pan away device, but instead of showing waves crashing on the shore, reveals the lovers reflected in a mirror, carrying right on.

As usual with Loach, his leads are unknowns, and their inexperience shows especially in the early scenes, but this worked for me – their slight nervousness matches the feelings you have in the early stages of a relationship, where you aren’t quite sure of the object of your affection. They also have an easy, believable chemistry, and grow more comfortable and relaxed as the film progresses. The supporting cast are uniformly excellent, with Shabana Bakhsh standing out as younger sister Tahara, fighting her own battles with her family and looking to Casim for support.

Ae Fond Kiss may not break any new ground for Loach as a filmmaker, but it’s a quietly lovely piece and a refreshing antidote to cynical British romances like Love Actually, as well as being his most commercial work to date. Well worth your time.