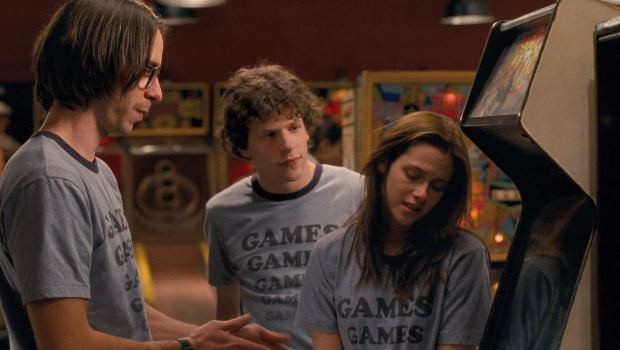 Summary: The film isn’t especially funny but it is tenderly amusing and rather sweet.

An understated, coming-of-age story, Adventureland arrives largely unheralded from writer-director Greg Mottola, the man who helmed the brashly enjoyable Superbad. A more thoughtful and altogether more adult feature, it’s just as appealing in its own way.

It’s 1987 in Pittsburgh and James Brennan (Jesse Eisenberg) is looking forward to spending his summer touring Europe with friends. Except his parents don’t have the money they promised him, so instead he takes a job as a games attendant at Adventureland, a crappy local amusement park. Things take a turn for the better though when he meets Em (Kristen Stewart), a disaffected fellow employee who only wants to escape her stepmother. Like his new friend Joel (Martin Starr), a nebbish Russian literature enthusiast and indeed, just about everyone working at the park, they’re bored senseless by their employment and seek refuge in smoking pot, flirting and listening to the likes of Lou Reed.

Scarcely any of the plot developments surprise and Adventureland unfolds at the unhurried pace of listless summer adolescence. But Mottola’s film has an authentic, vaguely autobiographical charm with a broad emotional palette. There’s strong acting from the principals and supporting cast and a refusal to mock any of its less well-adjusted characters. Bill Hader and Kristen Wiig as the quirky husband and wife owners of the park, as well as Ryan Reynolds as the handyman philanderer and Margarita Levieva as the resident hot chick occasionally threaten to descend into stock types. But sharp dialogue keeps them individualised.

The film isn’t especially funny but it is tenderly amusing and rather sweet, eschewing many of the clichés and recourse to calculated whimsy that undermine so many offbeat boy-meets-girl flicks. When James, channelling Shakespeare, tells Em that he couldn’t bring himself to lose his virginity to an ex-girlfriend because he “didn’t want to tend upon the hours and times” of her desires, it feels neither sappy or a counter-intuitive move on her, just absolutely right for the scene. Stewart carries a disenchantment beyond her years and Em offers much more than mere love interest, while Eisenberg retains a certain nobility even as a likeable everyman. Endearingly, the pair barely grow as characters but we grow to like them more as the film develops. Plus there’s a really cracking soundtrack.