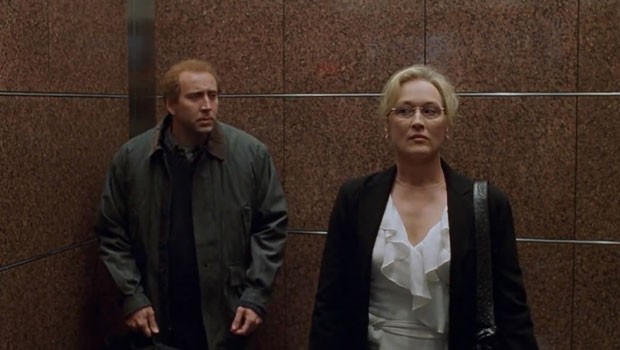 Summary: This is a highly split movie but it gains a wholeness through the poetic quality of Jonze's treatment and the grand themes of evolution and life.

THE message at the heart of Adaptation is in the title. The film is an adaptation of sorts, of ‘The Orchid Thief’, an actual non-fiction book about flowers. But in the process of adapting, Charlie Kaufman, both main character and screenwriter, has to learn to adapt his own life. In that process, the film doesn’t so much adapt as mutate the book. Lots of adapting going on then. The sad conclusion seems to be, however, that change just happens.

In yet another self-reflexive, doors-flung-open, genre-hopping piece of para-Hollywood cinema, Kaufman and Jonze pull out all the stops. The film places the screenwriter in the reality of his own creation and creative process: Played by Nicholas Cage, we see him first on the set of Being John Malkovich, the duo’s debut feature. But unlike so many other films-about-filmmaking, Adaptation uses its techniques to explore grand and questions about life. The plot involves three different points in time, between which the film jumps. As well as Kaufman’s struggle with himself and his script, there is the story of John Laroche, a heaven-taught botanist and flower-thief. We also follow the author of a book about Laroche, Susan Orlean (Meryl Streep).

Orlean becomes fascinated by Laroche’s obsession with the secret miracles of nature contained by flowers – whose mutable qualities provide another level of ‘adaptation’. One of the film’s successes is to actually get us to care about flowers, albeit as a metaphor for life. But in framing this, Orlean’s ‘one unembarrassed passion’, she becomes disillusioned in the search. When she finds her rare flower, ‘a ghost’, she realises it is ‘just a flower.’ Likewise, Kaufman can’t work out what is so amazing about flowers, even though he is obsessed with writing a film solely about them.

Charlie doesn’t want to sacrifice his artistic integrity to Hollywood’s insistence on action, crisis and formal resolution. In reality, he is a self-loathing neurotic, crying out for love but too entrenched to change. He also has a doppelganger. Donald, an invented twin brother, also played by Cage, is clearly the man Charlie would like to be. Where John Cusack’s character becomes hooked on ‘being’ Malkovich in the earlier film, however, it takes until the end for Charlie to recognise Donald as his missing half. Cage’s double performance is pathetically hilarious throughout. With Charlie we feel every sling and arrow.

This is a highly split movie but it gains a wholeness through the poetic quality of Jonze’s treatment and the grand themes of evolution and life. Darwin makes an entry, but he is used not as science but as poetry. The ending could be seen as giving in to everything Charlie has resisted, or as a jokey, ironic twist, but the difference in this most Hollywood of endings is that the preceding hour and a half has actually made us care what happens to the characters.

Charlie can’t finish his script from his desk. The twins find their lives are on the line when they get involved with the subject matter and start probing into Orlean’s movements. Let’s call it method screen-writing.