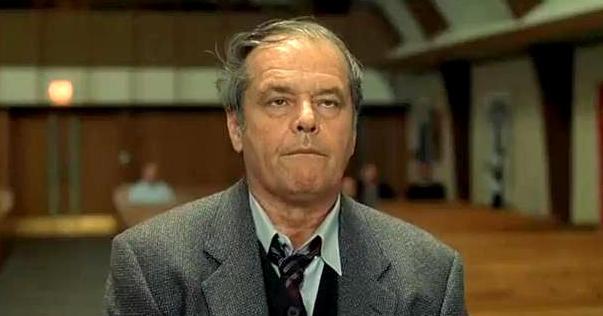 Summary: The film doesn’t try to answer all the questions it raises about the crushing disappointments of life, but it’s subtle, moving and frequently hilarious.

Jack Nicholson, it has to be said, does the whole wide-eyed, crazy routine very well indeed (see The Shining, Anger Management or Batman). But About Schmidt reminds us that Nicholson does understated even better, in this languid comedy-drama that harks back to the golden era of the 1970s when mainstream cinema wasn’t afraid to approach important themes like alienation from society and the elusive search for meaning in existence.

Nicholson plays Walter Schmidt, a stoic and serious-minded fellow who finds himself confronting the essential redundancy of his life when he retires from a virtual lifetime working for an insurance company. Swiftly made to feel irrelevant by the firm’s patronising replacement, Schmidt’s life is thrown into further disarray when his wife suddenly dies one afternoon. Propelled by a sudden need to make use of what little time he has left, Schmidt boards the luxury motor home he bought with his late wife, and heads across the country to stop his daughter marrying a man he deems to be a total idiot.

Amusingly narrated through Schmidt’s letters to an African child he starts to sponsor, not a lot actually happens in the film but there’s a nice sense of leisurely soul-searching that recalls The Straight Story or, in its own way, even Easy Rider (except with the elderly seen as outcasts here rather than the young). It’s refreshing to see a movie that doesn’t rely on the Bruckheimer school of rapid cuts, Election helmer Payne mostly employing long lingering shots, increasing the sense of Schmidt’s isolation from the world around him as well as letting every awkward exchange from a character linger to often hilarious effect (particularly whenever Randall, Schmidt’s daughter’s wannabe-entrepreneur boyfriend, appears).

Schmidt is potentially a cold character, spartan with words and frugal with money. Yet Nicholson’s wonderful performance makes him both appealing and compelling, every line of regret showing on his face as he contemplates a society that no longer has a use for him. It’s not the usual showy Hollywood drama performance, but a brilliantly subtle one that conveys a whole man’s life in every minute detail, and is up there with some of Nicholson’s very best roles.

Schmidt’s outlook on the world also seems a lot more genuine than the characters that surround him who mostly speak in a manner of insincere platitudes and loveless interactions. The film’s early shots of Schmidt disconnected from a world of soulless skyscrapers and his wife’s iron-clad rules give way to the freedom of open roads and a host of new colourful characters. Of these characters, Kathy Bates is particularly fun in her Oscar-nominated performance as a self-consciously ‘free spirit’ whose liberal nudity and unabashed speaking her mind is in stark contrast to Schmidt’s reserved outlook.

About Schmidt doesn’t have any ‘big scenes’ as such, but is packed with oddly affecting moments such as the wedding speech and the haunting final scene. The film doesn’t try to answer all the questions it raises about the crushing disappointments of life, but it’s subtle, moving and frequently hilarious. One of those movies you just know will be remembered for a very long time to come.