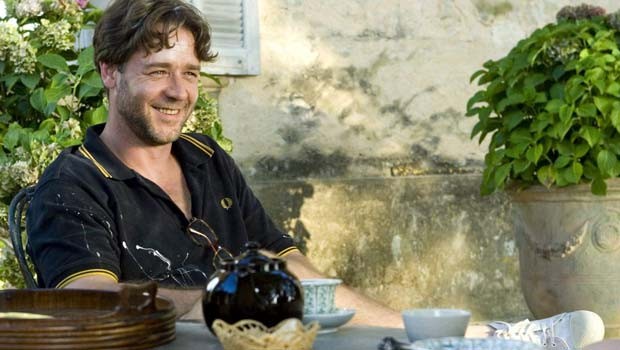 Summary: If you liked A Year In Provence, you'll like this.

I like Russell Crowe. At least, I like him when he’s playing muscular leaders of men, as he did in Gladiator and in Master & Commander. I like Ridley Scott – Blade Runner is my favourite film of all time, and the less said about GI Jane the better. So why didn’t I like A Good Year? Don’t worry, all will be revealed.

Russell plays Max, the kind of bloke who gives city traders a bad name. He doesn’t take loads of coke, but he messes with the rules and is rude to everyone, but as long as he makes lots of money noone really seems bothered. Max doesn’t really have any friends, though Tom Hollander is happy to drink wine with him. What he does have though, is memories of his Uncle Henry (Finney). The young Max, played sweetly by Freddie Highmore, used to spend all his holidays in France with his eccentric Uncle Henry, swimming, learning about wine and generally having a splendid time. But somehow they’ve lost touch, and Max has grown up – or grown into someone quite unlike Freddie Highmore, so he is surprised when he hears that Uncle Henry has died and left him the chateau. Of course all Max cares about now is money, so he reckons on making a packet, and heads off to France, where the peasants are jovial and ride bikes with their baskets brimming with local produce.

Max falls in love, Max ponders his life, some American girl (Cornish) turns up claiming to be Uncle Henry’s daughter, there’s some fuss about some mysterious wine. If you liked A Year In Provence, you’ll like this. Because its written by Peter Mayle, Ridley’s old advertising mate, and it’s as if the two of them dipped their pens in the rose, not the ink, because its self-indugent, middle aged twaddle. I bet the French loathe this kind of thing, its like those American films set in England where everyone is third cousin to the Queen and we all live in Knightsbridge.

Anyway France works its magic on Max’s shrivelled, blackened, money-grubbing heart, and he gives everything up to become a poor vintner – except he doesn’t – he ends the movie as rich and smug and self-satisfied as he begins it. And Crowe is terrible. Aside from the fact that he doesn’t look anything like young Highmore, he can’t do physical comedy, his accent wavers all over the place, and he’s just not convincing as the confident, supposedly charming Max. I don’t know when I’ve been more disappointed. I shall look forward to American Gangster and consign this one to the dark recesses of my memory.