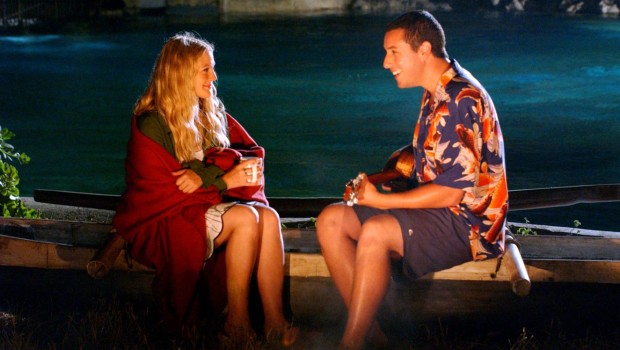 The interminably sweet Sandler and Barrymore re-teamed six years after the mammoth success of The Wedding Singer – what could possibly go wrong? In box office terms not a lot, with 50 First Dates pulling in $120 so far in the States alone. But don’t be fooled. This is no Wedding Singer Mark II, lacking all the warmth and wit of that movie in favour of lazy plotting and terrible jokes.

Sandler’s latest incarnation of his good-natured underachiever is marginally less neurotic than usual. He plays Henry, a Hawaii-based marine biologist (the perfect excuse to wheel in a puking walrus) whose fear of commitment has lead him to spin fabulous untruths to every female passing through the island. When Henry spies the upbeat pancake-loving Lucy (Barrymore) across a café one morning, he finds himself falling genuinely in love. This matter is complicated somewhat when he learns that a car crash has rendered Lucy with short-term amnesia and that every morning she forgets everything prior to her accident. And so each day Henry attempts to woo her anew, something that becomes slightly disheartening weeks down the line.

With a plot like this maybe it’s churlish to pick holes – indeed, there are so many that just listing them would fill a small telephone directory. Yet Groundhog Day, the obvious “inspiration” behind the high-concept premise, let you forget about any implausibility by milking the idea for all its worth, providing one hilarious scene after another. 50 First Dates fails to do anything particularly interesting with its own concept, leaving the movie feeling awkward and unnatural. Laughs too are few and far between. Sandler himself, oddly enough, isn’t allowed much in the way of actual jokes, the apparent comedy instead propelled by a succession of mirthless running gags (Rob Schneider’s accident prone Polynesian, Lusia Strus’ androgynous German park attendant or Sean Astin’s excitable lisp for starters).

Director Peter Segal (who directed Sandler in the stupid though bizarrely amusing Anger Management) pads the running time out with lots of panoramic shots of beautiful Hawaiian scenery set to relentlessly chirpy music. And actually, the Hawaiian backdrop proves to be one of the saving graces, the bright, unusual setting meaning the film is at least always stunning to look at (though you could admittedly get a similar effect from flicking onto Sky Travel). The other major plus is of course Sandler and Barrymore, a pair so radiant and likeable you expect them to drip romantic comedy from their pores. Their believable performances are enough to make 50 First Dates a far more watchable movie than it deserves to be.

Moronic, crude and occasionally mawkish, 50 First Dates is a big disappointment. If Sandler and Barrymore were actually offered a half decent script to work with, rather than a limply realised concept, then you could almost see them as one of the great romantic comedy double acts. Let’s just hope that next time we witness them together there’ll be less gimmicks, more laughs.