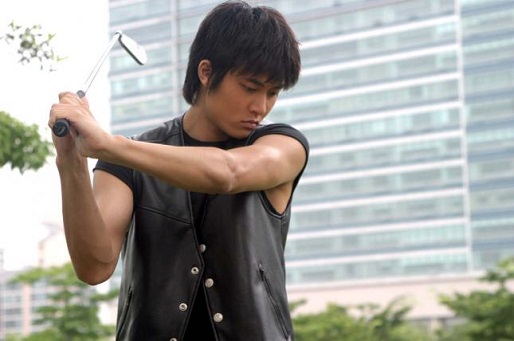 Summary: This is an often striking film to watch and There's no doubt that Ki-duk is a talented filmmaker, but his latest movie would have benefited from engaging the emotions as well as the senses.

After the international acclaim that greeted The Isle and particularly Spring, Summer, Fall, Winter…and Spring, there was always going to be a lot of expectation for Kim Ki-duk’s new picture – even if it does take its title from the least-used of all golf clubs (don’t worry, actual golf-orientated action is kept to a minimum). But, while there are some intoxicating moments along the way, 3 Iron is a rather disappointing outing for the South Korean auteur, his cold, detached style rather in need of a little heart to make his latest romance sparkle.

Tae-suk is a drifter who spends his days and evenings breaking into apartments while its occupants are away. Once there he strolls around naked, takes showers, listens to music, does the washing – acting as if he’s in his very own home. One day, while masturbating in the owners’ bed, he is a little unnerved to find a girl gazing at him with curiosity. Beaten up and bruised by her rich husband Sun-hwa is a professional model and fellow lost soul. After incapacitating Sun-hwa’s husband with the aid of a few well-hit golf balls, Tae-suk brings her into his strange, solitary lifestyle. And so the two drive around spending time in the very different apartments of the neighbourhood, an instinctive love developing without need of words.

Ki-duk is still defiantly following his own unique worldview, his languid story featuring little in the way of dialogue or plot. But, unlike Spring, Summer, Fall, Winter…and Spring, 3 Iron has little particularly novel or enlightening to say about the human condition and the results are a little listless at times. And whether you see the final descent into ghost territory as an affecting extension on the theme of love without boundaries (as in the recent positively soporific Tropical Malady) or a bit of a cop-out depends on your point of view (a rather diplomatic way of saying I found it a cop-out).

Of course there’s still much to appreciate here. Ki-duk’s movie may be impassive and distancing, but the performances do lend a warmth the proceedings. Lee seung-yeon convincingly moves from bruised, downtrodden victim to a character emboldened by love, while Jae Hee’s mixture of mystery, vulnerability and sly humour makes him an intriguing silent focus. Thankfully there are also a few deadpan moments of humour throughout the film (Tae-suk loading up a pellet gun only for its child owner to shoot his mother in the face with the offending weapon perhaps being a cruel highlight), and there are a clutch of odd, memorable scenes such as the couple’s desire to give an elderly heart-attack victim a traditional burial in the garden.

Yet somehow 3 Iron tries just a little too hard to recreate the hypnotic magic of Spring, Summer, Fall, Winter…and Spring without the same level of success, particularly when Ki-duk attempts to throw a couple of other genres into the mix like the (perhaps intentionally) clichéd interrogation scenes. This is an often striking film to watch and there’s no doubt that Ki-duk is a talented filmmaker, but his latest movie would have benefited from engaging the emotions as well as the senses.