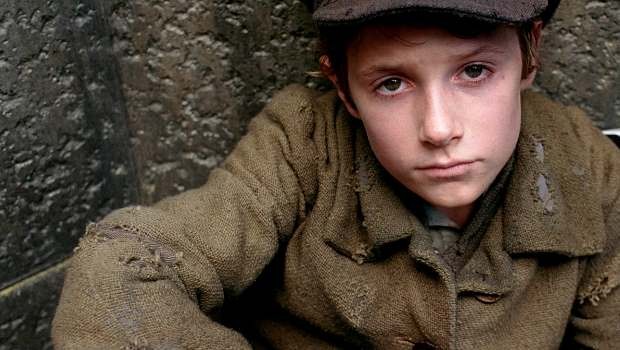 The Dickens Museum is just one of the many houses in which the great author lived, his only surviving London home and the place Oliver Twist was actually written, its four floors packed with Dickens ephemera. He would probably have felt quite at home in a room full of journalists whose facial hair, balding pates and witty repartee have probably changed little since his day, though the lack of smoking might have surprised him. The press conference is taking place in his study, where glass cases display illustrations explaining Victorian print methods and reproductions of his signature. There are also two marble busts and a large portrait. Presumably they weren’t there during his tenancy. Unless he was very vain…

The conference is rather intimate, about twenty hacks all squeezed up together, and it’s at this moment that I realise that the batteries on my Dictaphone have given up the ghost. Realising that I’d be transcribing by hand, I scribble a few notes to warm up. One of the two boys is pacing the hall outside but in modern dress I don’t recognise him – at first I think he plays Oliver but he seems quite confident, while Oliver spends most of the film shivering and crying. This is Dodger – or rather Harry Eden. Barney Clark, who plays Oliver, is weeny. The actors, filing in, are slightly surprised by the cosiness of the room but take it in their stride.

‘I found out that I had the part when I got back from holiday,’ Barney Clark explains. ‘There was a note to phone my agent and of course I was very happy and excited. I’d been through a workshop and two castings and then met Roman in Paris, and I knew that there were two finalists.’

Harry Eden, who was inspired to become an actor by Jack Wild’s performance in Oliver!, went through a similar process. ‘Roman actually told me I had the part in Paris. I’d always wanted to play the role, so it was a dream come true.’

All the actors were thrilled, if a little bit nervous, to be working with the great director on this most famous English novel.

‘I’d heard he was some kind of legend, so I was very nervous, but he was so nice,’ Harry Eden comments.

Barney Clark adds, ‘He’s a great director. Every shot is interesting, every bit of the frame – nothing’s wasted.’

Mark Strong explains, ‘I think Roman was making this film for his children in a way; with his background, growing up in the ghetto, losing his parents – how do you explain that kind of deprivation. And its still relevant today. It’s a very English story, so of course you have a few butterflies the night before, but at the same time you know you’re in good hands.’

Jamie Foreman agrees. ‘It’s such a universal story, with universal themes. I had no worries – I’d seen Tess and knew that Roman has a good understanding of 19th Century English Literature, and that he was making a serious adaptation. And, I mean, Ronnie Harwood! There was a lot invested in the production and Roman understands all the baggage that Oliver Twist carries.’

Of course this is not the first time that Oliver Twist has been adapted for the silver screen. According to the IMDB, there have been 18 straight adaptations (including made for tv), including David Lean’s 1948 production, and, most famously, the musical. How did the actors make these well-known parts their own?

Jamie Foreman explains ‘The script was great. Ronnie had gone back to the novel, and bought out a lot of the dark comedy and humour. There’s the scene where Bill gets ill – we see a different, more vulnerable side – and we see Bill with Toby Crakit, opening up a bit more. And Oliver Reed was playing Bill in a musical, it’s a different kind of performance. He’s the danger, yes, but in a musical – but I was playing Bill as a real person.’

‘Toby doesn’t appear in any of the other films, so I based my performance on the source material,’ Mark Strong, who bears no resemblance to the ginger-wigged dandy, explains. ‘But we weren’t slavishly faithful to the description – we had fun with the teeth.’

The lavish Prague sets, recreating Victorian London, and featuring 800 extras on some days, were a real aid to the cast.

‘It was weird at first,’ Barney Clark comments. ‘But very exciting.’

Harry Eden agrees. ‘The sets were enormous. They felt real, it was like being in London.’

Jamie Foreman chimes in ‘The design was phenomenal. It felt truthful. You’d put on your costume and walk out on the set – it was so incredibly detailed. If you went into a butcher’s shop, there were pork chops on the shelves. Fruit in the greengrocer’s. And the sets were built to scale, so we could really climb about on them when Barney and I were doing those scenes – it was dangerous, but fun.’

The old adage is ‘never work with children or animals’, and Jamie Foreman does both in this film. And of course, in a PG film, there is the issue of the abuse of both Nancy and poor, loyal Bullseye. Was that hard to depict without going over the line?

‘No,’ laughs Jamie Foreman, ‘ I wanted to barbecue that dog. It wasn’t Lassie, that’s for sure.’

The cast seem to have few fond memories of Bullseye, but on the other hand:

‘The horses were amazing’ Barney Clark comments, ‘On a day off we went riding with Roman, and he was standing up on the saddle, just holding onto the reins.’

Jamie Foreman comments on working with the boys, ‘That was quite hard. I had a few physically dangerous scenes. Barney had to just trust me.’

He had a interesting method of getting into character too.

‘He would scream just before each take’, Barney recalls.

How did the cast find working with that other legend, Sir Ben Kingsley?

Jamie Foreman: ‘He was a joy to work with. It was a great thrill. He would stay in character all the time and of course he was in a lot of pain because he was bent over double. He was intense.’

The boys had a different experience; ‘We only ever knew him as Fagin’ Barney Clark explains.

All of the cast take back memories of working with Roman Polanski, and being in Prague.

All Fagin’s boys would hang out together, go go-carting, and generally get into trouble. They enjoyed dropping things out of the hotel windows. Barney Clark remembers his favourite practical joke.

‘It was the day I’d done the walk to London and my feet were covered in bloody rags. I kept them on and walked into the lobby and fell over, crying, please don’t make me work anymore…’

All agree that this new production of the classic story has something to offer today’s audiences, including kids.

‘I’d tell my friends to go and see it because I’m in it,’ grins Harry Eden, ‘but also because it’s a great story. There’s plenty of fighting and action. It’s not boring.’