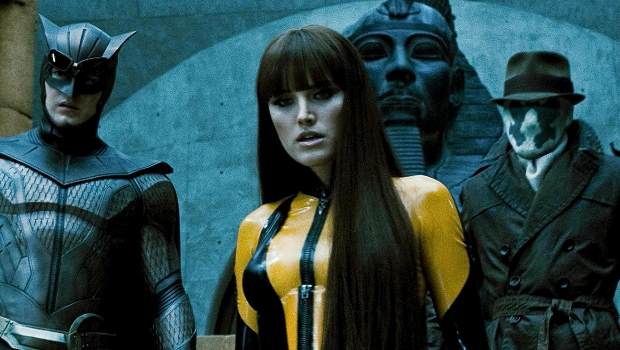 One of 2009’s most anticipated films, Zack Snyder’s adaptation of the most revered graphic novel of all time has had no shortage of media attention since it began production in 2007. But for those unfamiliar with the world of Watchmen – created in a series of 12 comics from 1985-6 by writer Alan Moore and artist Dave Gibbons – finding a way in can be daunting, particularly with most of the online discussion revolving around spoilerific plot details. So with newcomers in mind, what follows is a spoiler-free list of the ten things you really should know about Watchmen.

1. It’s about superheroes – Except they’re not that super. Telling the story of a disbanded group of masked vigilantes (only one of whom has any real super-powers) who are forced to reconnect after one of their number, The Comedian, is mysteriously murdered, Watchmen addresses the issues that most comic book movies conveniently avoid, like how the average superhero’s actions are morally dubious and their minds are clearly unhinged. While Christopher Nolan’s Batman movies have shown a move towards this kind of investigation, Gibbons and Moore’s comic takes it on big-style, resulting in some pretty bleak conclusions.

2. It’s timely – No cinemagoer can have failed to notice that, since Bryan Singer made superheroes equal big box office with 2000’s X-Men, spandex-clad crusaders have dominated the last decade’s movie scene. With Marvel Comics recently announcing a slate of upcoming releases that will surely push the genre well past saturation point, Watchmen has the potential to be a healthy corrective to these increasingly one-dimensional heroics.

3. It’s ambitious – That’s something of an understatement, as just a cursory glance through Watchmen’s 350-odd intensely detailed pages is enough to cause the most accomplished director to leave well alone. The timeline jumps in and out of multiple flashbacks, each chapter contains additional documents – letters, magazine articles etc. – which fill in important backstory details and one minor character reads a comic-within-the-comic entitled Tales of the Black Freighter, which parallels the wider narrative themes. Oh, and it’s set in an alternate 1985 where Nixon is still President and America won the Vietnam War. Appropriating all of this into a digestible form could be beyond the possibilities of one movie, which is probably why…

4. It’s been a long time coming – Since its publication in 1986 one movie version or another of Watchmen has been in the works, with directors Terry Gilliam, Darren Aronofsky and Paul Greengrass all attached for considerable periods. Greengrass’s take, a present-day version that focused on the war on terror, came closest to actually going before cameras in 2004, but fell apart, paving the way for 300 director – and huge Watchmen fanboy – Zack Snyder to come in. Against all seeming inevitabilities, he’s actually succeeded in completing a film of Watchmen.

5. The jury is out on its director – Snyder showed he can do butt-clenching action with his Dawn of the Dead remake, then proved himself a master visual stylist with the empty-headed but beautiful 300, but Watchmen is a much more complex beast than either of these. The film’s various trailers have shown off a collection of beautifully realised, heavily detailed and largely slo-mo recreations of frames from the comic that are breathtaking to look at but tell us nothing of the substance beneath. Reassuringly, Snyder has been vocal in assuring fans of his great respect and appreciation for Watchmen’s complexities, and his publicised changes – an opening montage that contextualizes the film’s alternate history, a decision to excise Tales of the Black Freighter and release it separately – seem like wise choices. But his constant habit of calling everything to do with Watchmen either “pretty cool” or “awesome” can’t be filling the comic’s grown-up fans with confidence.

6. It’s long – 2 hours and 43 minutes to be precise, so those who thought The Dark Knight stretched the patience should probably steer clear. But the pertinent question with Watchmen is whether even this length can do the material justice; when Terry Gilliam left the project he commented that the material would be best served by a 5-hour mini-series. Heroes has recently demonstrated how effectively a grand superhero narrative can be treated in small-screen form, so the pressure is definitely on for Snyder to make every minute count.

7. It’s not for kids – While most comic-book movie directors are forced to edit themselves into the 12A/PG-13 rating category in order to give the studios a widest possible target audience, Snyder appears to have convinced Warner Bros that Watchmen’s story has to be told without compromising the comic’s more extreme elements. With a plot centred on conspiracies, psychological trauma and violent vigilante justice, it goes without saying that this film won’t be playing to the Spider-Man audience.

8. It’s got a great cast – One of the clearest signs that Snyder’s respect for the comic is genuine is his excellent casting decisions, shunning big names in favour of great character actors. The key role of Rorschach – the comic’s somewhat unreliable narrator – is played by Jackie Earle Haley, a previous Oscar nominee with an uncanny ability to channel seething rage, one of the character’s defining traits. Equally exciting is the presence of Matthew Goode who, having made his mark with roles in Woody Allen’s Match Point and the little-seen heist drama The Lookout, is a great fit for shady billionaire Ozymandias. Added to these are two actors who immediately make any film more interesting, Patrick Wilson (Lakeview Terrace, Hard Candy) and Billy Crudup (Almost Famous, Stage Beauty), although Crudup’s presence will be felt rather than seen as his character, the superhuman Dr Manhattan, is the big blue computer-generated guy you’ve seen in the trailers. Completing the merry band are charmer Jeffrey Dean Morgan, cast against type as the violent and abusive Comedian, and lone female Malin Ackerman (27 Dresses). Together they make one of the most interesting casts ever seen in a blockbuster: let’s hope that’s a good thing.

9. Not everyone is happy about it – One person who won’t be lining up on opening night is the comic’s writer Alan Moore, whose name is nowhere to be seen on the credits. Thankfully that’s no reflection of the quality of the finished film, since Moore removed his name before Snyder began production, and has been dead set against any involvement in filmed versions of his stories following particularly bad experiences with The League of Extraordinary Gentlemen and V for Vendetta.

10. It’s sequel-proof – Okay, so one should never underestimate the ability of studio executives to squeeze redundant sequels out of stand-alone films, but unlike most other comic-book adaptations Watchmen comes with a definite ending that seals the fates of its characters and, more importantly, will leave audiences satisfied. No unfinished storylines, pointless sub-plots or superfluous characters whose relevance won’t be revealed until part two, just one killer narrative that, as long as Zack Snyder does his job right, will combine several parallel stories into one genre-busting adventure. All will be revealed on 6th March, which really can’t come soon enough.