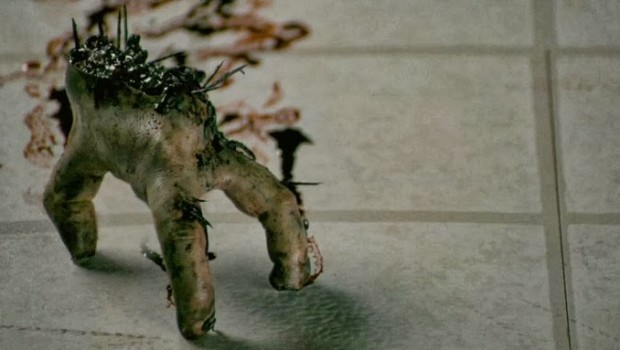 An inventive mix of Shivers, The Mist and The Thing, Toby Wilkins’ Splinter generates a stream of gloriously gory shocks on a miniscule budget. The British director tells us about creating scares on limited resources and his upcoming horror sequel The Grudge 3.

Splinter marks your feature directorial debut. Did you find it a fairly smooth shoot?

We shot Splinter on a very tight schedule, and that had its challenges, but I have been directing short films and other projects since the late 90s, so stepping into the feature world wasn’t as daunting as it might sound.

Shooting an indie feature is a lot like shooting a bigger budget short film, but with more pages to shoot, and more days to get it all done. The main difference in the longer format is that you have time to really work with the team, the crew, and the actors. You get to know each other and develop a trust that can only help the process.

Obviously Splinter has a much lower budget than the big effects movies you’ve worked on like Superman Returns and Spider-Man 3. Did you find that a help or a hindrance?

When I’m working on a tiny slice of a film, doing a title sequence, a trailer, or working as an artist on one or two shots for an effects sequence, the overall budget of the movie seems less relevant – it’s about doing the work to the highest possible standard. But when you are responsible for the big picture, the whole thing, it is certainly more of a challenge to work with limited resources.

I would say that having experienced both extremes of budget has been a very valuable experience. Going from my early self-financed short films, where we scrambled to find money to buy batteries for the walkie-talkies, to massive projects where we might spend more money on one shot than all my short films combined… that teaches you how to make the best use of whatever resources are available.

The special effects (and main title sequence) look pretty cool and very original. Bearing in mind your background, did you have much input into this?

As much as possible I wanted to have the effects for the creature and gore be practical, and we managed to avoid CG almost completely thanks to the team at Quantum Creation FX who came on board to do the creature work. I obviously worked very closely with them to develop the look of the thing, but it was their ingenuity and craftsmanship that brought the effects to life in front of the camera.

Once we were in post, that’s where I had to rely on my old visual effects skills, and those of fellow VFX artist Josh Miyaji, with painting out wires and puppeteer rods, adding little touches, getting rid of people’s limbs, and enhancing what we weren’t able to fully achieve on set. I had some fun doing the end titles while the final stages of post were going on, but the titles at the front were created by Framework Studio’s George Cawood who also co-created the original creature concept with me. He also helped with a few of the bigger effects shots that couldn’t be achieved safely on set.

What’s the origin of the idea behind Splinter?

As far as the creature goes, it was one of those brainstorming sessions we all have. George and I were discussing cool visual ideas for movies, and we started talking about parasites, like the ones that get inside animals and make them act a certain way, there are a bunch of them.

So by extension, what would it look like if something like that took over a human being? An entity that could puppeteer its victim from the inside, breaking and distorting them however it wants. With no regard for how the body normally moves, or how much pain it causes. That was the seed of the idea for the creature, then Ian Shorr’s script was the structure… the catalyst for bringing the idea to the screen.

What horror movies or directors have been your main influences? Splinter seems to have its roots in different types of horror film – survival horror, monster movies, body horror…

I have always been most influenced by directors who have the ability to branch out into many difference genres, not just horror. So my favourite directors tend to be those like Danny Boyle, Daren Aronofsky, Ridley Scott, and David Fincher. All of whom have made great horror films, and thrillers, as well as branching into other realms in and out of the genre.

I was a huge fan of disaster movies, post-apocalyptic movies, and, yes, definitely survival horror. The list of specific movies is long, but includes Alien, The Thing, Terminator, RoboCop, Dawn of the Dead, Mad Max 2, Assault on Precinct 13, Scanners… the list goes on and on.

Have you been pleased with how Splinter has been received by horror fans and critics?

The response has been overwhelmingly positive. The reviews, the fans, the awards, it’s been so great. Everyone involved in the film, from script, to screen, and beyond have worked so hard, and really gone above and beyond to make it happen. So to have their hard work be recognised and appreciated is very rewarding.

How did you come to work for Sam Raimi’s Ghost House Pictures?

That relationship started in 2005 when my short film Staring at the Sun played ScreamFest in LA after premiering at Sundance. Ghost House Pictures were on the judging panel for the horror fest, and the film ended up taking home the award for Best Horror Short.

The team at Ghost House were fans of the film, and invited me to start making short films for them. Tiny films at first, including a two-minute horror film called Mousetrap, a series of online shorts to promote The Grudge 2, an original series for FearNet called Devil’s Trade and ultimately my second feature, The Grudge 3. Ghost House and Sam Raimi have been incredibly supportive and nurturing, I couldn’t have asked for a better team to have shown me the ropes in this genre.

So what can we expect from the upcoming The Grudge 3, and how does it differ from the first two instalments?

I hope it fits pretty well with the canon of the American Grudge films, that was our goal going in. Of course a director can’t help but put his own mark on a film, but I tried to be true to Takashi Shimizu’s original vision and be respectful of his creation.

We did get to play a little more on the gory side with this film since it was to be an R-rated film. But fundamentally this is a more westernised story, and it takes place almost entirely in Chicago where The Grudge 2 left off.

Do you have any idea what your next movie after that is going to be? And are you ever likely to return to Britain to make a movie?

I am very open to returning home to shoot a film there. Of course I have a personal interest in telling stories that take place in London, and all that comes with living in that unique city, but I’m also a strong believer that the crews and actors in the UK are of the absolute highest calibre.

As for what’s next, I have many projects taking shape right now, at various stages. Some very exciting doors were opened by the critical success of Splinter, but I’m afraid I’m going to have to remain a little cagey and say you’ll just have to wait and see!