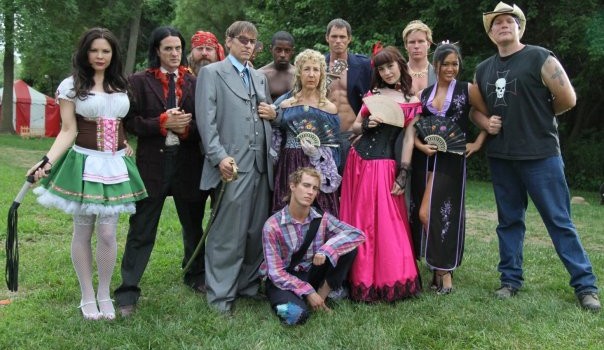 Tim Sullivan achieved cult success with 2001 Maniacs, his energetic remake of Herschell Gordon Lewis’s splatter classic Two Thousand Maniacs! He also helmed the effective ghost story Driftwood, and worked as a production assistant on everything from Scrooged to The Godfather III. Sullivan has now returned with the deranged splat sequel 2001 Maniacs: Field of Screams. “It became my Homer’s Odyssey to make the sequel I wanted to,” he tells Matt McAllister.

You just had the LA premiere of Field of Screams. How did that go?

Well, we had this gala premiere at The Egyptian Theater on Thursday night where they premiered Ben Hur, my all time favourite movie. Tobe Hooper was there and Mick Garris, Don Coscarelli, James Wan, Darren Lynn Bousman, Kane Hodder… It was a surreal Hollywood A-level event!

But I’m back in New Jersey now, in my hometown. And on Saturday night we had the premiere at the little theatre I used to go to as a kid and see grindhouse movies. When I was 10 or 11 years old, I’d go up there and stand around as they change the poster. I gave these big puppy dog eyes, and the guy would hand me the poster. I’d get Westworld, Willard, Dr Phibes… All these crazy posters! And I just dreamed of one day coming back…

I mean, this is a mind-trip! When I was 10 I went on my first date with a little girl called Lisa, and we went up there to see Benji. 36 years later, I’m there premiering this movie and she was there! It was a real homecoming!

Yeah! I mean growing up you see things like Benji and Willie Wonka and Chitty Chitty Bang Bang. And then you see your first horror movie, and everything changes. On television it was Bela Legosi’s Dracula, when I was five. But the first genre movie I saw at a movie theater was Conquest of the Planet of the Apes. That was magic – all this illusion and make-up. It opened up my mind!

And then the big eye-opener was Dawn of the Dead in 1978, when I was 14. I used to get the train to New York and go to 42nd Street, and watched double-bills of exploitation classics. That’s where I came across Herschell Gordon Lewis for the first time. I saw the original Two Thousand Maniacs! on a double bill with Caligua!

Aside from Herschell, which filmmakers have had the biggest influence on you?

You know, John Landis really is the man. There was nobody cooler than him. There was nothing like Animal House. It was so outrageous and bawdy but it was also intelligent and nostalgic, and had a lot to say politically about authority figures. And, my god, then he did An American Werewolf in London! I read about him in Famous Monsters magazine, and then saw Michael Jackson’s Thriller and Twilight Zone and Trading Places. I loved his sense of absurdity, the way he could combine horror and humour, and the way he never made fun of the werewolf.

Right around that time, I started going to film school. Everything I did, I tried to emulate John Landis – we all did! And then low and behold in 1988 I found myself as a production assistant on Coming to America. I got to hang out with John and see Rick Baker do all this amazing make-up. I was 24 years old then, and John said, “Tim if ever you make it out to California, give me a call, I’ll help you out.” That was all I needed. I sold everything I had – all my movie memorabilia and my KISS memorabilia – and I went to LA and called him up. He said, “Well, I didn’t really think you’d do it that quick!” But true to his word, he took me under his wing. And now he’s like family. He’s been an inspiration to me both as a celluloid hero and as a friend.

Like much of John Landis’s work, Field of Screams is as much a comedy as a horror movie…

Yeah, it’s a splat-stick. It’s what John Landis did, and it’s also what Herschell Gordon Lewis did. Wizard of Gore, Blood Feast, Two Thousand Maniacs!… The titles are so lurid, so over the top. Herschell certainly wasn’t taking these seriously and I don’t think he intended anyone else to. But people reviewing them didn’t get the joke.

They’re live action versions of Loony Tunes. He never tried to make it real, the blood and guts were so ridiculous. He was just having fun. Most horror movies in 1964, when Two Thousand Maniacs! came out, were in black and white, and he was shooting it in blood-red colour. I just liked the wild, spook-house ride of those films.

When I did the first 2001 Maniacs, we’d had a decade of films like Scream and I Know What You Did Last Summer, where they’re almost apologising for being horror movies, sort of mocking the genre. It was necessary after the ‘80s, but after a while… Well, I call them cock-tease movies. I thought it was time to get back to the EC Comics and Herschell Gordon Lewis world of blood and boobs and fun.

The script was written and filmed as a comedy. But in post-production, there were a lot of financiers and I think everyone started to second guess what the audience wanted, and I didn’t have that much clout. So I had to sit on the sidelines as the comedy was neutered and additional scenes were shot, more traditional scare moments. I mean I’m very proud of the first film, it works, but there are a lot of uneven moments.

Initially the film got a lot of bad reviews. Not because the film was bad, but because of expectations. It’s like if you market a King Arthur story as Excalibur but then people go see it and it’s Monty Python and the Holy Grail, they won’t know what to think of it. So it became my mission, my Homer’s Odyssey, to make the sequel I wanted to. I said I wasn’t going to do it unless I got full creative control.

It took five years to get the rights back. But it was like a trade off – they said, alright, you can do it your way, but you’re going to have a third of the budget of the first film. I thought, well, if that’s the price for freedom then I’ll pay it. And I actually think the lack of resources led to greater creative choices by all involved.

Was it a blow that Robert Englund couldn’t reprise his role as Mayor Buckman this time around?

He was always part of the sequel, which at one point was called Beverly Hellbillies. And he was very loyal, but when it finally came to the sequel, our resources, as I say, had been cut. So I guess at the time his people just felt it was more about the buck than the Buckman. And we lost him. It was that moment of truth when you say to yourself, “Do I carry on? Or do I just stop?” Well, my musical heroes are KISS. I remember when they lost Peter Criss, their original drummer, and they were like, “We’re going to carry on!” So I thought, let’s see if we can get another Buckman.

And you managed to get Bill Moseley.

Yeah, the only other person I could see playing him was Bill Moseley. When the first 2001 Maniacs was released, The Devil’s Rejects had just come out. At every horror convention we did, there’d be a table of Maniacs on one side and a table of Rejects on the other. I mean, wow – if the Maniacs and Rejects got together, what kid of bastard children would that create, you know?

Bill had always been like “I wanna be a Maniac! I wanna be a Maniac!” And I had actually written a part for him in the sequel, a character called Doc Tickles, who cuts the girl in half and tickles her with a feather. I called him up and said, “How would you like to be a Buckman?” Bill said, “Well Robert’s got some pretty big shoes to fill, but if I can do it my way, I’d love to.” And I told him I was thinking of using his pal Nivek Ogre from Repo for Dr Tickles, and we then folded him into the character of Harper Alexander. We then had Bill and Ogre, so all the Repo fans have been showing up!

How difficult is it to promote a low-budget horror movie these days?

We’ve been doing these roadshow appearances all over the world, which is what Bill, Ogre and Darren Lynn Bousman did with Repo. The audiences appreciate the fact we’re pounding the pavement, reaching out to the fans.

Nowadays it’s so hard with the DVD market as it is. A lot of the grindhouses and drive-ins are gone, so many lower budgeted independent horror movies sometimes go straight to DVD, even though they’re worthy of a theatrical experience.

So you have to tour with your horror movie as an independent band would. I’m enjoying the hell of it, going out there and meeting the fans. You get to see what works and what doesn’t when you see it with an audience. That’s why the second film is stripped of all fat… I hope it gets shown at midnight screenings, because it really is designed to be experienced in a crowd.

You’d like to make a third film, is that right?

I would love it. A third, a fourth, a fifth… I already know what the third one would be, I’ve been thinking about it for some time. There are a lot of stories we can tell about the Maniacs. They’ve been rising from the dead since 1864. We could even go back to 1969 and have some kids on their way to Woodstock wind up there! But it’s really up to the fans, you know? They can make it happen by buying it! If the sales are there, there will be a third and fourth.

It seems like a good time for old-school comedy-horrors. Films like Hatchet and Wrong Turn 2 also had these great retro gore-effects and knockabout comedy scenes…

I can’t believe you mentioned Hatchet and Wrong Turn 2, because Adam Green, Joe Lynch and I are very close friends, we’re all playing in the same sandbox… Joe, Adam and I are currently teamed up for a project, like a band super-group. It’s a horror super-group, and in addition to us we have Adam Rifkin who did Detroit Rock City and The Dark Backward. We have a semi-secret project that I think is going to make a lot of horror fans very happy.

Brothers of the Blood is my passion project. It’s a vampire film – and I know in the age of Twilight and True Blood people might roll their eyes and say, “Not another vampire project!”. But this is very romantic and Shakespearean, much like Tony Scott’s The Hunger, and it’s a love triangle between two male vampires and a female vampire. I really want to push the sexual envelope on this one! It’s now been put on the frontburner, so I hope that will be one of the next things I do.

The other big thing I got going on, starting on August 2, is I’m judging the second season of Scream Queens on VH-1. Every week I direct an actress in a scene from a classic horror movie. The winner got to be in Saw VII. It was a lot of fun!