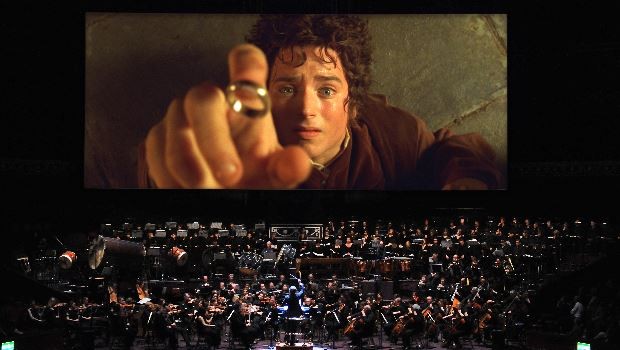 The Lord of the Rings Symphony

The Lord of the Rings, not content with being the most popular book in Britain, and occupying three slots in the all-time top ten box office, seems to be extending its dominance across all artistic categories. The film’s thunderous soundtrack, scored by Howard Shore, was ranked history’s ninth best piece of classical music in a Classic FM poll. The score came ahead of work by Dvorak, Holst and Grieg. Arch-rival Harry Potter (as represented by its John Williams score) was left trailing in 57th position.

As a big fan of Howard Shore’s score, I had tried to get tickets for the first performance last year at the RFH, but the one-off show sold out within hours. So I was delighted to find out that new dates had been booked, and made sure I had my ticket well in advance. I was particularly interested in seeing how the live performance would differ from the film soundtrack. Reluctantly abandoning the idea of dressing as Galadriel, I joined the happy throng of Rings fans mustering outside the Albert Hall. The journey continues…

The programme is divided into six movements, two for each book of the trilogy. Rather than being organised as a proper symphony, the concert is a re-telling of the film story through music, with audio-visual cues provided by John Howe and Alan Lee’s drawings and paintings, which were projected onto a screen above the orchestra, and a corresponding light show. Fellowship of the Ring dominated the first half, and took you from The Prophecy to the Shire (‘Concerning Hobbits’) and then onto Bree, Weathertop, Rivendell, Moria, Lothlorien, down the Great River past the Argonath to Parth Galen and the Breaking of The Fellowship. This was much the most satisfying part of the concert; though some tracks were missed off, the introduction of the Fellowship theme bought a big grin to my face.

After this great start the second half was sadly a bit of a let-down. There just wasn’t enough music! The same amount of time was allocated for The Two Towers and The Return of the King as for Fellowship and as a consequence both were massively truncated. Foundations of Stone cut before it really got started. Very little of the Rohirric themes – not enough of the beautiful Hardanger. Even Helm’s Deep got fairly short shrift. Similarly, in The Return of the King, no Ash and Smoke, no Shelob’s Lair, no wonderful stirring Ride of the Rohirrim, and, saddest of all to me, they cut The Black Gate Opens, which contains the sublime music that underscores Sam and Frodo struggling up the side of Mount Doom, and the swell of Into the West as Sam hoists Frodo onto his shoulder – a scene that still gives me goosebumps.

The real problem, I think, was not the concert, which as a whistle-stop tour of Peter Jackson’s Middle Earth worked fine, but with billing it as a symphony. I would have expected from that description that Shore would have taken a few of the beautiful themes from the films and reworked and expanded them into a proper symphony, something the orchestra could really fly with, instead of these slightly piddly abbreviated versions of the themes from the soundtrack. I also missed the vocal talents of Elizabeth Fraser – Sissel’s vocal was very good, but just not as ethereal and alien.

It wasn’t a bad concert – I still had tears in my eyes during the Beacons sequence and during Into The West – just something less than it might have been.