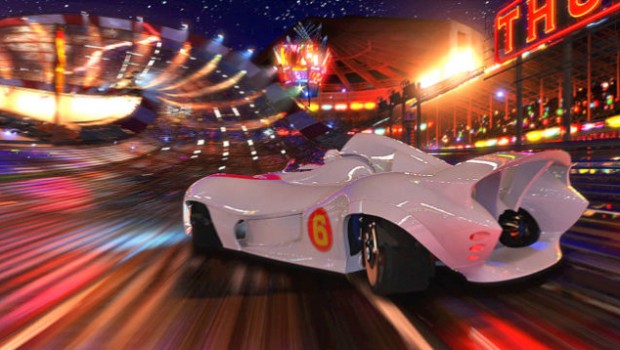 Starring Emile Hirsch as the eponymous Speed, with Christina Ricci, Matthew Fox, Susan Sarandon and John Goodman, the film was entirely shot against greenscreen and in high-definition video, using a layering method reminiscent of anime that keeps both the foreground and background in focus.

You’ve described Speed Racer as “like 300 and Sin City on crack”. What did you mean by that?

They’re part of an emerging genre, the name of which hasn’t been properly coined yet. It’s a form of movie that’s trying to free up the traditional approach towards effect-laden films, or films with some form of fantasy universe that requires backdrops you can’t build. Or may not want to. I consider these movies to be ‘graphic novel films’. In both cases, the filmmakers decided they would approach their definition of the universe in a stylistic way.

Creating our live action interpretation of a famous anime we decided to make a new format, building layered elements through and through. If you think about the way in which anime has presented characters and events of all sorts through the decades, it’s really much more expressive than a live action movie. Anime is built in layers, drawn obviously, and often with bending perspectives. Without the assistance of 3D and computer layout tools, anime animators have been applying a designer’s eye to how cameras work their way through space for a long time.

The original Speed Racer cartoon pre-dated the Matrix’s concept of ‘bullet time’ in its title sequence, as Speed leaps from Mach 5, freezes in mid-jump and the camera traces an arc from front to sideways. Is it significant that you’re now appropriating anime techniques for live action features?

Absolutely. Anime is one of the fundamental staging points we began with, trying to put to work and imagine what the nuances of that animated look are. It has a cinematic language all of its own. Every fan of movies possesses an innate understanding of the language of live action cinema. They know, for example, what certain editing conventions mean. They implicitly understand what different lensing signifies, even if they don’t understand it technically. That’s equally true for anime but in a different way.

How much freedom do the Wachowski Brothers allow you to experiment?

I’m completely free. We know each other really well, to the extent that we can finish each other’s sentences. Over time I’ve come to realise that we share similar sensibilities, that if I experiment towards a particular kind of stylisation in any form, colour or camera, I will find a place to engage with them. So they allow me a free hand.

For something like Speed Racer, I try to find our base creative confluences. There are a number of rules you build with regard to the way the film’s universe looks and works, so we spend quite a lot of time before we start shooting the actors trying to figure out what these rules are. Then we simply roll the dice and try our best to communicate, motivate and inspire other members of the crew to expand upon, evolve and perfect these guidelines and visual attributes to a final form. It was the same for The Matrix Trilogy.

It’s not easy trying to create a fantasy universe. But Speed Racer is a universe already, so we started with the original show. Of course, it’s fairly minimalist if you watch the series. Still, if you step back and consider the show within an emerging movement in animation and Japanese story presentation, look at all the surrounding shows and works, you begin to see conventions that are just spectacular. And you think, ‘what would that look like on an extreme level, the sort of level you can only create with serious funding?’

What were you aiming for with the Car Fu sequences?

The original show is about racing. And in the 60s there was Le Mans, the big cross country races, the Grand Prix, all those. So the sport’s been around for 100 years or something and we wanted to conceive its next generation. And if you want to reimagine the attitudes and eyes of the current generation of moviegoers, then you might find yourself going down a similar path to the one the inventors of the X Games first embarked upon, whereby motorbikes are made to perform acrobatics, ballet, and with all sorts of mad inventions.

We wanted to do that with the idea of rally racing, remake it in an extreme form. Imagination can be almost limitless in video games, in terms of the crazy, alternative things you can do in the format of a race – space, underwater, novelty vehicles, anything. That’s the kind of extremes we wanted to bring to motorsport.

And you’ve been involved in the video game tie-in?

Yeah. We wanted to do a pretty hardcore next gen and online game as well. Often, when projects are greenlit, you’re behind in terms of development for a game worthy of the next generation. This film was made for all ages, but especially kids and teens, that ‘magic’ audience for video games. Like everyone we’ve been having fun with our first Wiis back home. So we thought we’d try to make a game that’s accessible to everyone and follows that same ‘poptimistic’ ethos.

Was it restricting working on a family-friendly film?

No. How many disturbingly dark movies can you make before you start wanting to experiment in another way? We were in an anti-Matrix place, we wanted to make a bright, optimistic world and push the happy button. It was a blast.

Do you have a favourite sequence?

At the start of the film there’s a track called Thunderhead which is like a rollercoaster. It’s really hard to race and brutal on the racers. It has a real edge to it that I like. There are races in the middle of the film that are a fictitious version of North Africa and some pretty spectacular and funny moments throughout when we play mindgames with the land scheme and the audience.

There’s quite a lot of material in this form of collage, when the world around the cars is individually photographed. It’s sliced, diced and relayered again like a multi-plane animation. Later in the film, there are races in a Tokyo-like superstructure where we try to push the limits in terms of colour, reflection and classic anime animation lines. It’s a really visual techno palace by the end.

Finally, is it true that you sent a letter to Bill Clinton when he was US president warning that the technology to create photorealistic human beings is now so advanced that it could conceivably be used for criminal deception?

Yes. And I have friends working on it in the military. They have a little lab here in Santa Monica called the Institute for Creative Technologies. It’s a fascinating blend of real-time game technology and the topmost, state-of-the-art, virtual human rendering methodologies. They’re involved with battlefield situations and training, as well as looking into terrorism and other domestic security simulations. Which is very interesting in my belief. There’s rather more to it than that and they’re not quite there yet. But they will be in a few years.