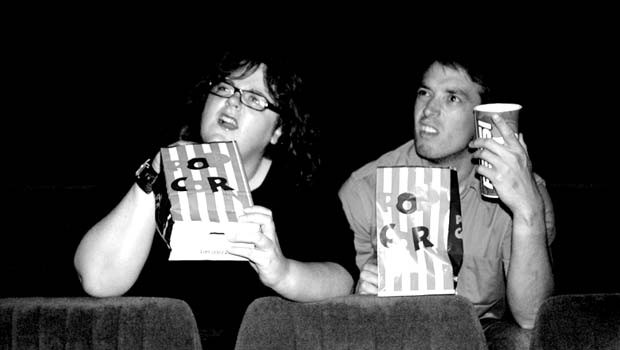 Some films are so awful that they’re truly wonderful, which is why stand-up comedians Nicko Vaughn and Joe Timmins created The Bad Film Club to celebrate these desperate, magnificent crimes against celluloid.

Based in Cardiff but touring throughout the UK’s arthouse cinemas, the former script advisor and post-production sound editor provide running commentary on the ridiculous plotlines, dodgy acting and technical howlers that make a universally derided film like Battlefield Earth a genuine classic of the genre, often with the help of special guest comedians like Stewart Lee, Glenn Wool, Phil Nichol, Brendon Burns and Simon Munnery.

The club takes up residence at the Edinburgh Fringe this August in the Pleasance Dome, disrespectfully dissecting such masterworks as Jaws 3D, Pearl Harbour, Who Dares Wins, Viva Knievel! and The Village People’s peerless Cant Stop The Music.

Future Movies caught up with Nicko and Joe before a scurrilous debriefing of Top Gun at the Cameo cinema in Edinburgh.

How did The Bad Film Club start?

Nicko: We were performing at the Edinburgh Fringe, doing our show at the Underbelly and it left us with 23 hours of the day to kill. So we decided to go to charity shops and buy more and more of these bad DVDs. People would come to our flat to watch them and by the end of the Fringe there were more people in our flat watching us watching movies than at our actual show. So we thought we may as well do this on a bigger scale and see what happens.

Joe: Watching crappy films is all we want to do. And if other people want to do it with us, so much the better.

When did it become a regular night?

Nicko: It became regular from the first time we did it. We asked our local arts cinema in Cardiff, the Chapter Arts Centre, if we could do a monthly Bad Film Club and they replied yes, we think it’s a great idea. So we’ve been doing it since January 2006.

Why do you ask guest comedians to appear?

Nicko: We’d always wanted to have guest comedians and we began with less well-known comics in Cardiff. When we started to play the Barbican Centre in London we thought we should try to get some bigger names as it would add another element. We know why our film choices are bad but we didn’t necessarily appreciate what they would consider worthy. Stewart Lee chose March of the Penguins for it’s overriding conservatism for example.

Why do you consistently return to films like Jaws IV and Top Gun?

Nicko: If we’re playing at a new venue, it’s always best to go in with a film that people recognise, rather than something obscure like Shark Attack 3.

Is there a growing cult of watching bad films?

Nicko: We find it odd that a tiny club we started for our own amusement and that of film buffs has now, bizarrely, caught on. We’ve had articles in the Sunday Times, the Observer and all these big newspapers, yet at the heart of it we’re still just two people who love film sharing their bad movies with others.

Do you prefer bad films to good ones?

Nicko: Not at all. We both used to work in the film industry. Of course I like good movies and they all have their own merits. For me, bad films are just a genre of films, like cowboy movies or horror. Sometimes you’re in the mood for watching a really good movie and other times you’re in the mood to see a truly dire one. As long as you derive enjoyment from it, they’re both valid choices.

Joe: A film like Jaws IV is absolutely hilarious. It’s genuinely fun to watch because you can make jokes about it, whereas if you’re watching a good film you have to sit and concentrate.

How do you select the films? Does Hollywood dominate your choices?

Nicko: A good bad movie is one made in all seriousness that accidentally becomes a parody of itself. Which is why comedy movies don’t tend to work in The Bad Film Club because the opposite of comedy is boredom. You’re generally safe with any Bruckheimer movie or anything by Michael Bay. Anything with Ben Affleck or Kevin Costner in it, those complete all-American hero movies.

Joe: Usually, they’ve got an idea, but rather than research it they’ve clearly not been arsed. In Top Gun for example, the enemy are in American planes as well. They’re just painted black with a red star on the back because they’re supposed to be vaguely Commie. Instead of just making them North Korean, which would have been plausible. It’s all so preposterously gung-ho macho, why couldn’t they have just made them normal fighter pilots? If they’d researched it on any level it might have been a good film.

Nicko: Bruckheimer’s the worst for that though isn’t he?

Nicko: Didn’t he produce King Arthur? The best bit for me was when they rescue Kiera Knightley and she says “that was terrible, they tortured me with machines”. Did they? Machines you say? You mean the ones that haven’t been invented yet and won’t be for another five or six hundred years? They just popped into their De Loreans and came back with crossbows. And they had explosions too! I was expecting a car chase.

Are there any new films you’re considering for The Bad Film Club?
Nicko: Snakes on a Train was pretty bad. It’s an American film about Mexicans. Puking up snakes. And then they go on a train.

Joe: The opening scene is this woman puking up snakes in the desert with her back to you and the cast are only speaking Spanish for the first ten minutes, so you’re just sitting there with no idea what’s going on.

Nicko: It’s like that infamous Star Wars Christmas Special. There’s a bit there where all the wookie family are talking – “Rruurrrrruurrrru!” – and no-one’s explaining what the hell is happening!

Have any directors been in contact regarding you trashing their work?

Joe: We did Hawk the Slayer once in Cardiff and as we were going into the cinema somebody told us the director’s wife was there. We mentioned this in the intro and somebody shouted out: “Yes! It’s me at the back!” We asked if she had anything to say about it and she replied: “Yes. It’s a shit film. I hate it. And I’ve come to see you tear it to bits.”